American rival Terry Hutchinson summed up being on his syndicate's scaled-down version of the 75-foot foiling monohulls to be used at Auckland 2021 "like getting into a car with my 16-year-old son driving for the first time … just wondering what could possibly go wrong".

The two skippers have given first-hand accounts of their experiences from the opening phase of testing as teams use development programs for the build of their first full-scale racing yachts to be launched this year. 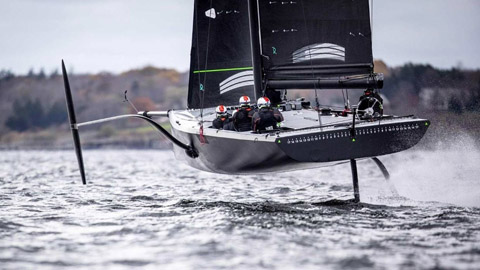 AMERICAN MAGIC
Dean Barker at the helm of American Magic's foiling monohull test boat ahead of the 2021 America's Cup.

Ainslie, who heads the INEOS Team UK challenge, admitted there were some heart-in-mouth moments.

"As you can probably see by some of the footage, we've had some pretty big wipeouts, some fun moments, and some pretty exhilarating moments as well," Ainslie told Yachtracing.life. 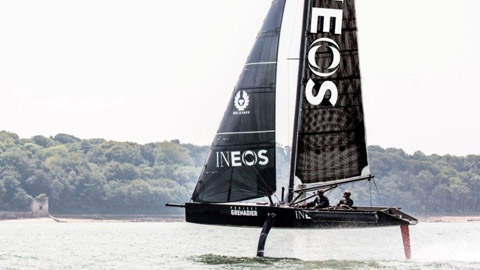 INEOS Team UK foiling on their 28-foot America's Cup test boat with Sir Ben Ainslie and Giles Scott on board.

Ainslie said they had to trust the design genius of Emirates Team New Zealand as they worked off the design parameters for the revolutionary concept.

"Grant Dalton told me that this boat was going to work … it was going to be a fantastic boat, so we just believed that would be the case," Ainslie said.

"In all seriousness, we didn't know. It only looked like a very, very exciting concept. We did have a meeting with Grant and (Team NZ design boss) Dan Bernasconi and a few of the other guys from the other teams and talked through it. A few eyebrows were raised, and I think probably if you ask Grant and Dan honestly, they weren't entirely sure if the concept would work either. 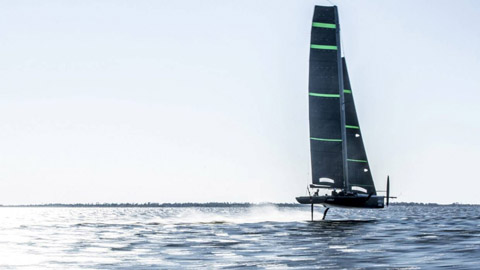 "But they've done a great job. I think it's a really neat compromise. Clearly there was a push for monohulls and something a little bit like what we've traditionally seen in the Cup, but also keeping these fast foiling boats alive and that development going as well.

"To a certain extent, it's still yet to be proven at the larger scale. From what we've seen with our boat and American Magic with their slightly larger version, you'd like to think that this concept will work at that scale and will be a very impressive yacht."

Ainslie said sailing the full-sized race boat would be a major examination for the crews.

"You look at the roles on the boat – the energy consumption, having the Code Zero, the sail handling, the manoeuvres – it's going to be really hands-on for the sailing team to be able to sail the boat to its maximum performance and to handle it that way.

"Then, the proposed race courses, size of the courses, boundaries, and so on. I think we're going to really have our work cut out from a sailor's perspective, which is good. It's what you want. You want to be pushed to the limit. I think we certainly will see that."

While Ainslie has been on the wheel of his test boat, American Magic skipper Terry Hutchinson is tactician to Dean Barker who has been signed by the New York Yacht Club to helm their boat.

That left Hutchinson feeling somewhat vulnerable early on as his fate was in the hands of Barker.

"The first day that I was on the boat when we foiled it was quite windy and some of the systems weren't operating perfectly. And so the boat was a bit loose and we were a bit out of control – and that was exactly how it felt. It was almost like getting into a car with my 16-year-old son driving for the first time. Just wondering what could possibly go wrong," he told Yachracing.life in a separate interview.

"As you evolve and as you listen to the communication between Dean and Andrew [Campbell] and Goodie [Paul Goodison] and hear the level of calm that's in their voice, what you quickly realise is the level of experience that you have and that we have as a team.

"Very quickly you go from nervous anticipation to getting into the routine of just doing your job on the boat. Sitting up in the front of the boat and learning how to go fast, for me it's a really, really, unbelievable experience. It's probably some of the most fun that I've had just sailing, because the boat is so different.

"The sensation of speed is impressive, and yet I've spent the better part of a month now sailing around at 30 something knots, and it's becoming normal."

Hutchinson said the challenge now was to transfer their growing test data into developing the ultimate America's Cup machine.

"If we don't have a fast boat, I'm quite certain it doesn't matter how well we race a slower boat, you're probably not going to win. So we have to make sure we work hard on developing a fast boat."