The IMOCA podium will soon be complete as the battles in the chasing fleet intensify. The damaged Ultime, Sodebo 3 is expected to end her heroic race tonight.  The Class 40 leaders continue to be bunched together as the sailors struggle with the soaring heat.

Charlie Dalin has added a second place finish to his victory in the previous edition of the Transat Jacques Vabre. Along with partner Paul Meilhat, Dalin crossed the finish line aboard their boat Apivia 20 hours 12 minutes and 21 seconds behind the winner, LinkedOut. The pair covered 6,642.18 miles at an average speed of 14.64 knots.

Speaking on the finish line Dalin said, “We set out to try and do a double, but we were missing perhaps two or three ingredients, a touch of success, a touch of speed in certain conditions.”

Apivia led the fleet in the early stages of the race but from Day 5 the lead changed many times between the leading three boats. “We are very happy with this second place. In the end, the final stretches made it impossible to come back. It was a very intense three-boat race”, conceded Dalin.

The titanic tussle for fourth and fifth is continuing about 350 miles from the finish. Britain’s Sam Davies and partner Nico Lunven on Initiatives Coeur are just 40 miles behind Arkea Paprec sailed by Sébastien Simon and Yann Elies. The two boats were virtually side by side this morning but Arkea Paprec has been the faster boat over recent hours, not surprising as Davies’ boat is almost ten years older.

Actual Ultim 3 crossed the finish line overnight, the fourth of five Ultimes to have finished so far.

Yves Le Blévec and  Anthony Marchand finished 2 days 8 hours 29 minutes and 59 seconds behind the winners Maxi Edmond de Rothschild. They travelled a true distance 9,332 miles at an average speed of just over 21 knots.

Meanwhile the final Ultime competing, Sodebo Ultim 3  is approaching Martinique on port tack – it’s favoured tack due to a damaged starboard foil. The huge multihull hit an object north of Madeira and despite stopping for repairs co-skippers Thomas Coville and Thomas Rouxel have had to nurse the boat across the Atlantic. She’s expected later tonight. 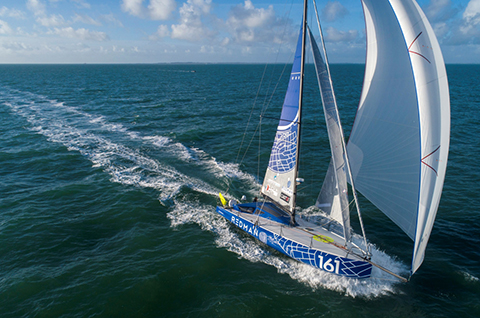 With only 900 miles remaining to the finish, the top ten boats are still only separated by 70 miles. Antoine Carpentier is partnered with Spanish sailor Pablo Santurde del Arco aboard Redman. They have 8 Transat Jacques Vabre races between them and that experience is showing in the close, nervy battle at the front of the fleet.

Britons Brian Thompson and Alistair Richardson, who have struggled with their electronics for much of the race, are now back up to tenth place having slipped back at the Cape Verde islands.

The heat in the middle of the Atlantic is now intense with many sailors opting to sleep on deck. Emile Henry, co-skipper of Happyvore, says crews are having to adapt to the heat, “ It's very hot, in the boat we're not far short of 40 degrees. We're managing it quite well by keeping our watches short when the helmsman is in the sun. But I lost my hat yesterday".