Superyacht Security & Privacy: Nothing Is ''Mission Impossible'' for Oceanco

James Bond had 'Q' to supply his outlandish gadgets; superyacht owners have 'O' aka Oceanco.

Rotterdam The Hague, Nl, May 18, 2021 - (ACN Newswire) - From drone blocking force fields to motion-detecting smart floors, the kinds of futuristic technologies we are used to seeing in action films are not so far from the reality of today's top-level security and privacy options for large custom superyachts.

Oceanco is accustomed to unique and challenging client requests, from unusual feats of design to remarkable security systems. Here, the custom superyacht builder shares some of the options available for onboard technology that could have come straight out of the pages of a spy novel. 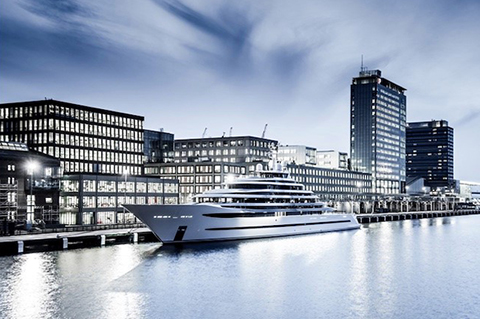 For custom-built superyachts, there are some owners who choose to opt for secret-service level security and privacy on board, maybe because they enjoy cutting edge gadgetry or they wish to continue their regular lifestyle while at sea. From drone blocking force fields to motion-detecting smart floors, the kinds of futuristic technologies we are used to seeing in action films are not so far from the reality of today's top-level security and privacy options for large custom superyachts.

And with increasing autonomy and range on today's vessels, many are heading off the beaten track and into remote waters where local medical backup might be in shorter supply. In response, the grandest and most well-equipped superyachts can be kitted out with fully functioning hospitals, manned by dedicated medical staff, to provide reassurance.

"When it comes to creating a fully bespoke superyacht, we are accustomed to the challenges of specialist requests such as these. James Bond had 'Q' to supply his outlandish gadgets; superyacht owners have 'O', aka Oceanco," comments Paris Baloumis Oceanco's Marketing Director.

Although the company naturally maintains full confidentiality regarding any specific client's requirements as well as their identities. "We bring in experts from inside and outside yachting to consult on high-security projects and adopt technologies from other sectors. What's more, we take our own security at Oceanco very seriously to maintain privacy during the construction of our yachts; the shipyard is fitted out with high-security systems, too." Marcel Onkenhout Oceanco's CEO.

In the extremely rare case that an unwanted visitor boards their yacht, some owners like the reassurance of a secure location to go to. These places are known as 'citadels', and they were first put to use in commercial shipping before crossing over to yachting.

Citadels are kitted out with independent, overriding access to the yacht's navigational and satellite communications systems, so even when you don't have access to the bridge, you can maintain full control. The rooms themselves are fitted with reinforced doors and have ballistic protection on the surrounding walls. Inside, they are equipped with their own ventilation systems as well as water and food supplies to provide total self-sufficiency.

EMERGENCY ESCAPE 'LIFE-PODS' FOR A RAPID GETAWAY
And the next generation of citadels could be distinctly more mobile. Like crossing a lifeboat with a spaceship, these emergency escape 'Life-Pods' provide a rapid getaway. The watertight pods are constructed from high-tech materials to resist impact and feature built-in GPS trackers, temperature and fire barrier controls, and air purification systems. 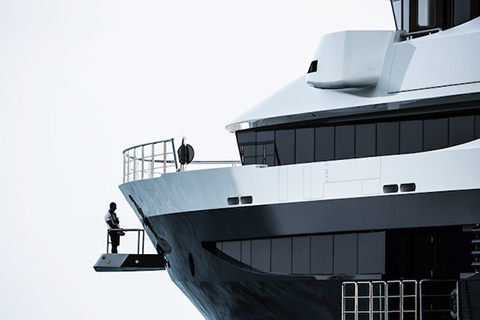 91,5 metres megayacht Tranquility at the anchor in a Med bay. One of her crew controlling the helm from the outside. CREDIT: Guillaume Plisson


ANTI-DRONE SYSTEMS
In recent years, drones have been making headlines for their interference with commercial airports, and the military have been particularly keen to curb their capability to spy on top-secret locations. As well as being a handy tool for the paparazzi to get up-close shots of a superyacht's private enclaves and the guests within them, those involved in the murky waters of industrial espionage can thank drones for greatly increasing their capabilities, too.

But a new generation of devices to detect and defeat these drones is emerging to neutralize the occasional threats to privacy and security on yachts. One such defense system identifies any commercial drones in operation within a 20 kilometer radius, providing GPS positions of both the drone and the pilot as well as an indication of said drone's heading and speed.

A 500-meter electronic 'exclusion zone' around the yacht
Once the drone threat has been confirmed, the system engages a 500-meter-plus electronic 'exclusion zone' around the yacht (not unlike the force fields we are used to seeing in sci-fi films) that blocks any unwanted airborne visitors. If the drone makes it to the perimeter of the exclusion zone, its controls and video feed are jammed, effectively rendering the pilot's controls useless, and its 'return to home' function (which usually kicks in when the drone has a low battery) is triggered.

ACOUSTIC DETERRENTS
The Long-Range Acoustic Device, or LRAD for short, is an acoustic deterrent that was originally developed for military use. But as the threat of piracy to commercial shipping and yachting in certain areas such as the Gulf of Aden grew over recent decades, the device has been adopted to deter unwelcome visitors in non-military settings.

A range of more than three kilometers
The sonic device emits an uncomfortable, high-pitched noise that is above the tolerance of the average person, causing them to be driven away from whoever is controlling it. With a practical range of more than three kilometers, the device can be adjusted to broadcast voice commands in numerous languages on top of the deterrent tones, allowing you to provide warnings to potential interlopers (or even the odd suspicious fishing boat).

INTRUDER DIVER DETECTORS
Think someone could sneak up on a superyacht by pulling on a wet suit and scuba gear? Think again, as some superyachts are choosing to install sonar systems that detect, track and identify divers or underwater vehicles approaching from any direction. 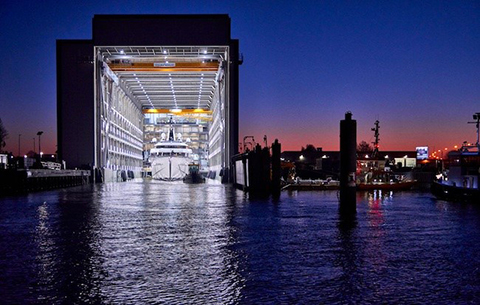 Keeping sonar environmentally friendly
Sonardyne's Sentinel Intruder Detection Sonar is the world's most widely deployed system of its kind, used by naval vessels, commercial harbors and luxury yachts alike. With a functional range of up to 900 meters for diver detection, it is man-portable, making it particularly quick to deploy, and it can even be placed on the yacht's tenders to increase your scope of situational awareness. What's more, the manufacturer has created the system to be environmentally friendly, so it won't have an adverse effect on the local sea life.

ONBOARD HOSPITALS
Perhaps a yacht is expecting to travel to remote regions where on-the-ground medical support is less accessible. Or maybe the Owners are more mature and have specific conditions that mean they seek the reassurance of an onsite doctor or nurse. Either way, an onboard hospital is not an uncommon request for custom superyacht builders.

Emergency facilities like a private hospital
Kitted out like an emergency room of a private hospital, they are equipped with oxygen tanks, defibrillators, specialized medications and intravenous fluids, while a number of yachts offer rehabilitation machines for injuries, such as decompression chambers for those who are planning on some serious scuba diving expeditions. And should a patient require further medical attention, most of today's large yachts have a helipad with the possibility of bringing in medic air services to the yacht or heli-evacuating them away to a larger facility ashore.

A DOCTOR-ON-CALL
Remember the scene in Casino Royale where James Bond hooks himself up to a remote medical diagnostic system and the doctors talk him through his medical emergency with all his vitals up on their screens' Well, that scene is less fictional than you might at first have thought.

With the right diagnostic kit placed onboard, crew or even medical professionals can link up to a remote medical support line such as MedAire from International SOS, allowing a team of doctors to see the patient's condition in real-time and provide advice on procedures or medication in order to stabilize the patient.

Before an emergency has even arisen, the telehealth consultants will often provide guidance on medical room design and ventilation, lighting and medical wash facilities, as well as what diagnostic equipment to place onboard. Who needs the flying doctors when you can beam them into wherever you're in the world at a moment's notice?

SMART FLOORS THAT TRACK MOVEMENT
Currently in development, these smart floors are like an upgraded surveillance system for the 21st century. A step beyond conventional security cameras, they are minimally invasive in the sense that they have no impact on an owner's or guest's experience of a room and their privacy within it, while also being able to alert the bridge if someone unexpectedly enters. And over time, the smart floor creates a digital pressure video of the visitor's movement that can be tracked and re-evaluated. This makes them suitable for very private spaces, like bathrooms and bedrooms. The smart floors can also be used beyond security measures, to automatically switch lighting or heating and air conditioning systems on and off, allowing the yacht to become more energy-efficient and therefore sustainable.

WINDOWS AS TOUGH AS STEEL
The ingenious engineers behind A60 windows have taken the notion of toughened safety glass to new heights. Made from hot extruded steel or stainless steel profiles, the compound glass windows provide protection against a fire for up to an hour and are available in a range of thicknesses while maintaining low optical distortion and good light transmittance. They can be thermally or chemically toughened, laminated, thermally isolated, and manufactured to be soundproof or bulletproof. The glass is mounted into a frame with a specialist U-profile system, ensuring it remains flexible and minimizes the risk of corrosion from the environment over time. When you have concerns about protecting what is behind a yacht's windows, the A60 is the go-to solution.

A CYBERSECURITY NET
Just as any home or office will likely choose to protect itself from outsiders accessing private and personal data, any superyacht could be vulnerable to cyber threats. With the increasing preponderance of wirelessly controlled systems featured onboard, those yachts that do not provide themselves with an added layer of technological security can leave themselves open to hacking. Oceanco works with a select range of top-tier cyber-security professionals to ensure that its yachts are built with the kind of network protections that will keep its owners and crew safe, through a combination of initial risk assessments during the development phase of a project and ongoing upgrades as the digital landscape evolves.

We are: Built by Oceanco