Riviera celebrates the launch of the 20th Sports Motor Yacht

The 72 and 68 Sports Motor Yachts, the flagships of the luxurious Riviera collection, have reached a significant milestone in production with the completion of Hull 20 following the new designs being launched in 2018.

Sports Motor Yachts, now cruising some of the world’s most exotic waters, have received accolades from owners and the marine industry by setting the standard that defines 40 years of evolution by Riviera, Australia’s largest luxury motor yacht builder. 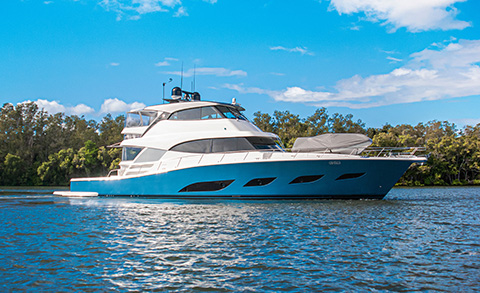 Since their launch, Riviera 72 and 68 SMYs are now cruising the waters of Australia, New Zealand, The Caribbean, Vanuatu, Indonesia, The Mediterranean and Thailand, and further yachts are now being completed for the United States. 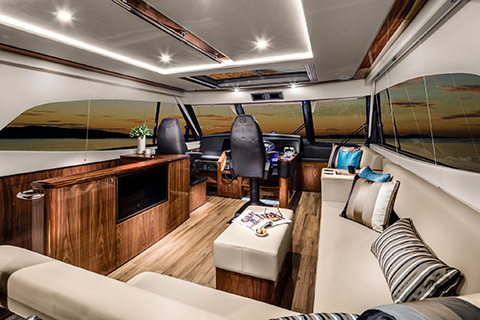 Mike and his wife Annie plan to locate their Riviera 72 SMY in Mike’s hometown of Perth after first cruising and exploring the east coast of Australia with family and friends.

“I love the Riviera story and their focus on the customer. This aligns with what I have lived and breathed for many years at Apple; the attention to detail, the customer care and consideration are important values to me,” he said. 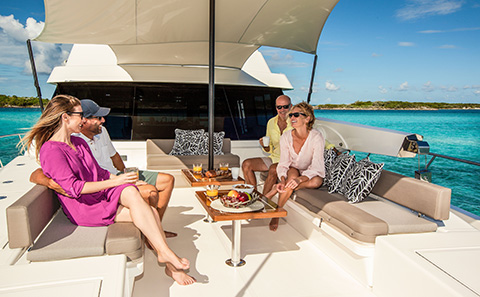 “I had been looking at Riviera for the past several years, and especially the flybridge models. It had to be large enough to accommodate our family as well as our parents and sisters with their families.”

“When the 72 SMY was released it was exactly what we were looking for – it was exceptional. Not only the size of the boat and the options on her, but the finish was just magnificent. That hooked me.” 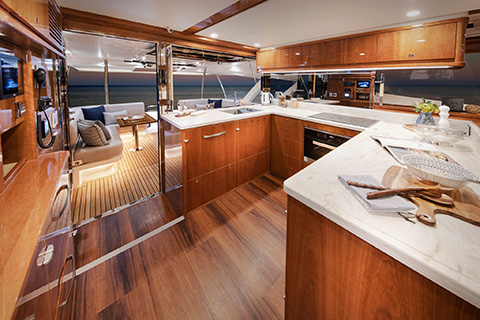 Riviera spent two years developing the 68 and 72 SMY, which included highly experienced Riviera owners from around the world providing valued insight and feeback regarding what they wished for in their ultimate luxury motor yacht.

Their dream was a blue-water yacht that combines impressive speed, considerable sport fishing and other water sports capabilities with the the confidence and safety of high bulwark side decks, a foredeck entertainment centre, fully enclosed flybridge with internal stairs, a covered mezzanine dining area, a crew cabin with day head off the mezzanine and ultra-luxurious interiors. 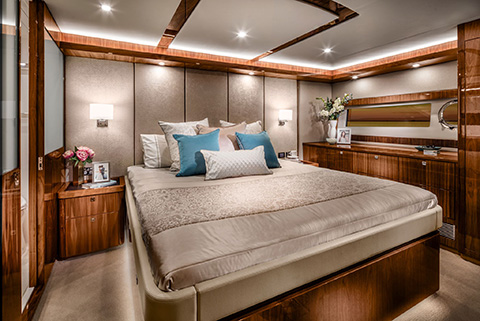 Riviera has followed the blue-water journeys of several 72 SMY owners who have put the engineering, fuel efficincey, technology and luxury afforded by this outstanding motor yacht to the test crossing seas and oceans.

When New Zealand-based Brits Joe and Cheryl Pengelly decided to move up from their Riviera 61 Flybridge Series II, they spent a year searching the world for their perfect motor yacht before returning where they began, with a Riviera. 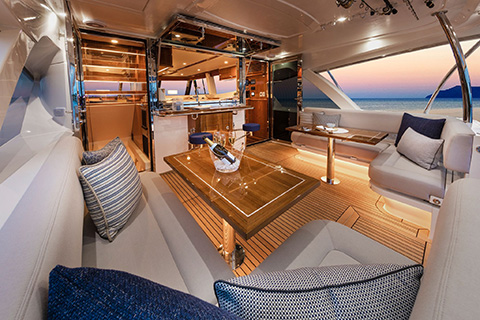 Their customised Riviera 72 Sports Motor Yacht, Our Vibe, is the couple’s seventh boat.

Accompanied by Dean Horgan, Riviera’s dealer principal at R Marine Flagship in Auckland, the Pengellys cruised 1,700 nautical miles home across the Tasman Sea from the Gold Coast to Auckland via Lord Howe island. 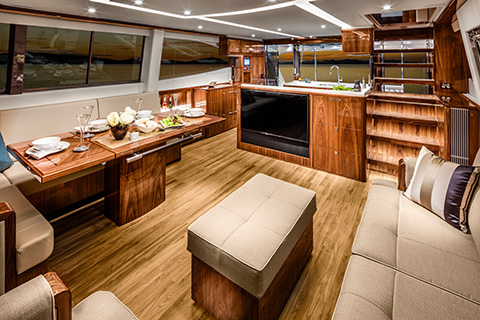 “It was a big decision to take a new boat and sail across the Tasman; the boat performed beyond my expectation,” said Joe.

“This has to be the highest-specced Riviera on the market today and has a lot of advantages over the bigger boats, which appealed to us both. The engineering was very pleasing, it had all the latest technology, and great living spaces: alfresco areas between the galley and the transom, the foredeck living area, and a huge flybridge with a day bed rear deck and an aft helm.

“I wanted to make sure I was comfortable, so one day we ran the boat in 40 knots of weather. I was blown away with the handling and it gave me all the confidence to go ahead with the trip.”

Regan and Sandra Fleming last year took their 11-year-old son out of the classroom and into the ‘school of South Pacific life’ aboard their new Riviera 68 Sports Motor Yacht, Living the Life.

The Riviera 68 and 72 Sports Motor Yacht share a hull running surface designed in collaboration with Dutch naval architects, Mulder Design, to excel at varying speeds and in a wide range of offshore conditions.


The Flemings spent almost six months aboardLiving the Life on a journey they say ‘is the first of many trips of a lifetime’ that they will enjoy.

“It’s like turning up on your personal five-star hotel on the water,” said Regan.  “With Riviera building boats with longer-range travel in mind, and with this level of luxury, the 68 Sports Motor Yacht ticked all the boxes for us.”

As the flagship of the Riviera collection, the 72 SMY encompasses design and engineering refinements and advancements that place her at the leading edge of blue-water cruising. She is completely designed for superior offshore and extended cruising.

“The launching of Hull 20 is a celebration for the entire Riviera team since the world premiere of the 72 SMY in 2018,” said Riviera owner Rodney Longhurst.

“She was developed and engineered to be the ultimate motor yacht for Riviera owners, and she is the most advanced motor yacht of her class as our owners will attest.”

The Riviera 72 SMY employs the latest digital technology and her premium propulsion system has been engineered to provide optimal blue-water performance for smooth, quiet and fuel-efficient cruising. Svan testing undertaken by Riviera’s technicians on the 68 SMY and 72 SMY shows sound readings at fast cruise speed of 63dBA in the flybridge and 64dBA in the master stateroom.

The Riviera 72 is powered by twin MAN V12 turbo diesel engines delivering up to 1900hp and a top speed of about 33 knots. At a cruising speed of 20 knots, the 72 SMY provides a cruising range of 650 nautical miles.

The 72 SMY typically appeals to luxury motor yacht owners who aspire to spend more time aboard with family and friends.

Luxury and comfort are the high points of the accommodation aboard the Riviera 72 SMY with a forward VIP guest stateroom and private en suite complemented by a port guest stateroom with two-way bathroom. The full-beam owner’s stateroom is located amidships in the classic layout.

The 72 SMY features an expansive cockpit and mezzanine with a large undercover dining area. It has a spacious saloon with a large fine-leather lounge and dining area with seating for eight guests. A generous U-shaped aft galley on the main deck is perfectly designed for extended cruising and living aboard.

The Riviera family are celebrating this month with the world premiere of the new 64 Sports Motor Yacht. Private inspections are now being arranged for her previews on the Gold Coast in June, Port Stephens, Sydney, and New Zealand in July followed by American previews in September.