Synteak® has been operating for more than 10 years becoming a leader in the synthetic teak sector, working the raw material by hand to create the blankets for boats in PlasDECK and having a network of certified installers and dealers throughout Europe.

THE PRODUCT AND THE IMPORTANCE OF ITS ORIGIN

PlasDECK® is produced in Akron (USA), famous for being considered the world capital of plastic polymer. Here PlasDECK has the greatest knowledge, technologies and materials at its disposal in order to create a product of the highest possible quality, always updated on a technical level and with different exclusive and proprietary patents. Let's find out below what differentiates PlasDECK from the rest of the products on the market. 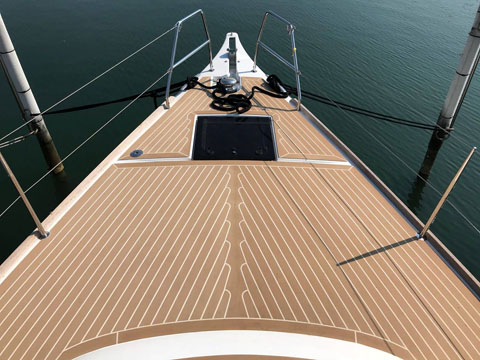 Synthetic teak can all look similar, but what really makes a difference? As in any other material, the main factor that leads a product to be poor or excellent is undoubtedly the quality of the materials, in this case chemical, that make it up. PlasDECK has at its disposal the best PVC in the world in terms of technical characteristics, which gives the product high levels of performance in resistance, durability, aesthetic maintenance, temperature and much more.

Other fundamental components are anti-UV protectors and anti-fungal inhibitors, which often go into the background but which play a vital role in protecting the material from external agents (we'll talk more about this later). Many materials in circulation neglect quality, not visible at first glance, to focus on factors such as aesthetics and marketing. 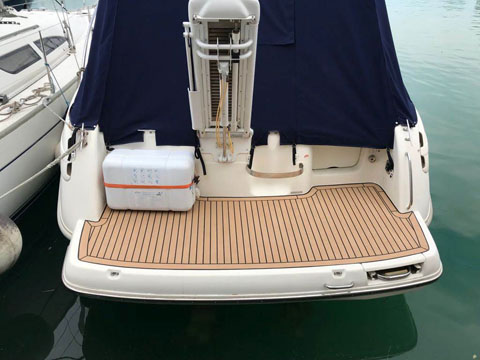 THE ONLY ONE WITH ANTI-AGING PATENT

If we had to think about the most important thing for a synthetic teak there would be no doubt, the ability not to age. Too many synthetics on the market maybe very beautiful aesthetically but that keep the expectations for only a few years. Changing the color of the blanket, dryness, damage to the joints between slats, the onset of mold, infiltration and detachment are just some of the things that could happen to a synthetic material. Why isn't there any risk with PlasDECK? PlasDECK is the owner of a patent capable of maintaining the chemical characteristics of PVC blocked over time.

This means that all the principles and additives in the material remain unchanged: the oils (contained in any type of PVC) do not come out thus avoiding dryness, physical weakening, color change and detachment from the surface. Also the UV protectors and the antifungals will remain blocked, protecting the material forever. This patent is tested and demonstrated by tests performed for the patent itself during registration and is available to the public online following the principle of fairness and transparency. 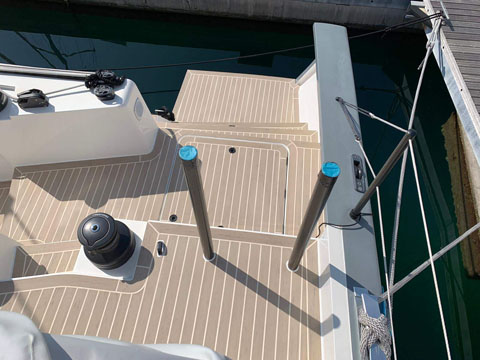 PlasDECK, thanks precisely to the quality of its PVC, manages to excel even at the temperature level under the sun. It is in fact demonstrated by tests with thermal cameras that can be easily replicated even by the public, which PlasDECK stores much less heat.

The manufacturing company is keen to stress that this result is achieved only thanks to the high-level (patented) chemical composition, without resorting to procedures such as air storage in PVC or addition of lightening agents, which would raise the capacity to resist heat but would damage the material on countless fronts such as the strength and stability of the material over time (unfortunately these "tricks" are often used). 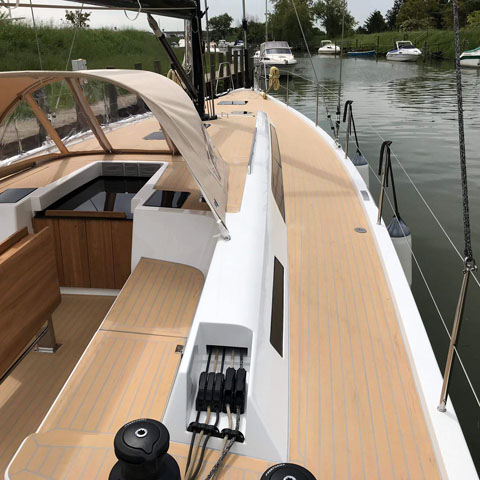 PlasDECK is a zero-maintenance material, a feature that every owner should consider when choosing a product to be installed on deck. It does not require frequent cleaning or sanding and the comments are from the same PVC as the material itself (therefore they also do not require maintenance). Any scratch, hole, cut can be repaired without noticing any aesthetic damage.

The material is completely closed pore and does not absorb any type of dirt, from the most classic one like coffee to the most difficult one like motor oil. Everything can be cleaned immediately or after some time, with hot water and a cloth (but no chemical product, not even bleach!). Sanding is never required. To better appreciate this quality, it is recommended to carry out comparative tests with other products on the market so as to grasp the difference between PlasDECK. 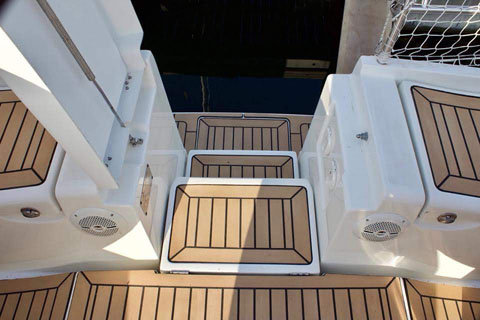 In addition to the chemical aspect, PlasDECK is also patented in the design and physical characteristics that make it a unique material that is clearly distinguishable from the mass. This allows PlasDECK to be the only synthetic teak with a completely flat and smooth base, a technically ideal solution (compared to grooved solutions, often mistakenly referred to as higher performance) for several reasons:

- Absence of air and water infiltration. Indeed, it will be much more difficult, if not impossible, to have water infiltration problems after a few years, a proven problem with grooved products which, by not completely filling with adhesive, leave room for air and water, often creating very serious problems. 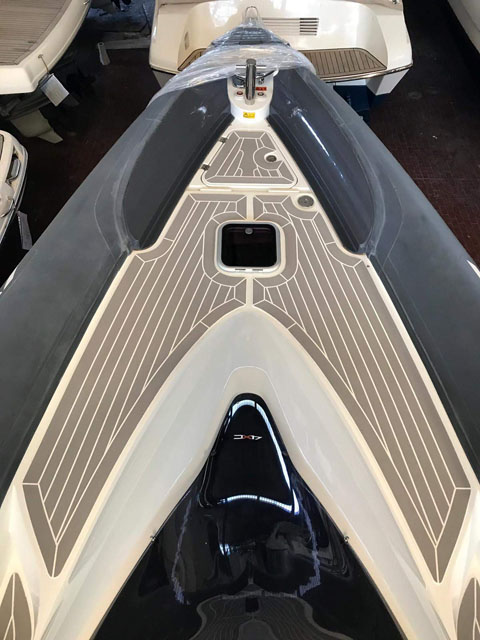 1) flat and smooth surface that favors the attachment of the glue in a much more homogeneous way. (also allows the use of innovative adhesives such as high-performance double-sided adhesives, which cannot be placed on grooved surfaces)

2) Quality of PlasDECK PVC, of ​​vital importance to obtain high performance of the adhesives which suffer and are often incompatible with lower quality polymers

3) Zero loss of PVC oils thanks to the patent described in the previous paragraphs. This makes it possible not to compromise the adhesion between material and adhesive with the passage of time, due precisely to the loss of oils naturally present in the PVC towards the bottom of the material. 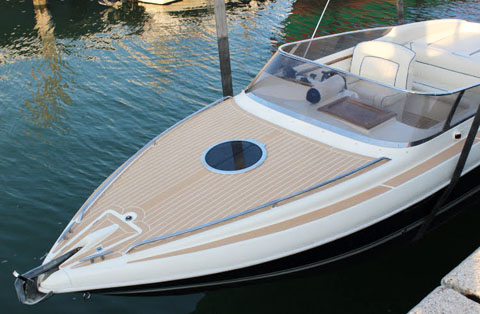 Among the many features of PlasDECK there are three others worthy of mention:

- Hot welding with high tear resistance: With the advent of heat-welded synthetics (fusion process) all the materials that have it have made a decisive step forward in terms of resistance. In fact, it is advised to be wary of "do-it-yourself" materials processed using a cold welding process (the initial saving is certainly not worth the lost resistance). But are all the hot welds the same? Absolutely not, in fact even in this case the quality of PVC plays a fundamental role in ensuring that no detachment between the slats is ever possible. This makes PlasDECK material of the highest reliance also in this sense, being equipped with a welding between the slats with very high tensile strength. This feature is testable with bare hands because a low quality PVC can be torn off with a simple hand movement performed with force on the weld (this will allow you to distinguish resistant products from those that are less so).

- Wide range of colors: PlasDECK has a huge color choice. There are as many as 27 possible color combinations between line and board, some of which are exclusive. Really a huge choice compared to materials like natural teak. Color not only gives more possibilities for customization, but allows for better performance in terms of perceived temperature. 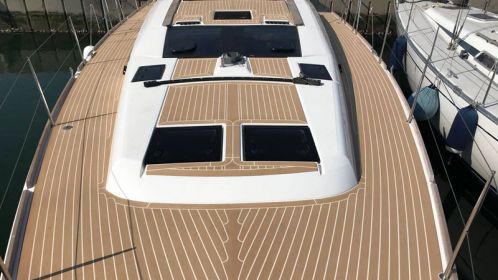 A question that many people ask is: Are synthetic teak really ecological? The answer needs a thorough explanation. This is because the ecological side of any synthetic is given by the fact that it avoids deforestation and that it is produced with theoretically recyclable materials. The truth, however, is that synthetic teak is treated as a non-recyclable waste and disposed of accordingly. And this is where PlasDECK made one of its biggest investments. The American company, helped also by the high quality of its PVC (which makes it recyclable without the loss of its chemical properties), has created an internal and completely circular re-use process. Each product waste is recycled to create a new product, already winner of the MIAMI INNOVATION AWARD for ecology and innovation: PlasDECK ECO SERIES.

It is nothing but a new product physically and chemically identical to the normal PlasDECK but formed at 60% (lower base) from recycled material. This allows you to have the same features at a lower price, also creating a 100% ecological life cycle. This process is exclusive to PlasDECK which has also established itself with this product as a leading company in innovation and in step with the times.

Another innovation is the futuristic PlasDECK glowing azure , a particular coloration of the material with the ability to charge with solar energy and then emit blue light throughout the night. This product was also this winner of the important MIAMI INNOVATION AWARD award, this time for boat safety. In fact blue light, in addition to giving the boat a truly unique appearance, creates a night-time emergency lighting system.

It is possible to see all the lines of the deck light up or only those that are covered and are considered more important, such as the sides of the gangways or the steps. The production process of this particular color range is exclusive to PlasDECK and requires very advanced production techniques.

PlasDECK is available throughout Europe thanks to the importer SYNTEAK®, the leading Italian brand in the laying of synthetic teak.