Finally! Finally the Vendée Globe IMOCA fleet in France is getting back on the water. Images are spectacular. It is as if all that pent up energy and frustration is unlocked all at once. But, for sure, there is a sigh of relief from each of the skippers as their boats go sailing again.

In France it was on May 11 that the first IMOCAs were put back in the water and the sailors reconnect with their natural habitat. And with it, no more winching and training sessions in the garage or the spare room at home. No more mental preparation sessions learning to deal with the isolation and the many online weather sessions analysing the Vendéee Globe course in fine, fine detail.

Armel Tripon (L’Occitane en Provence) succintly sums up the spirit which seems universal among the skippers: “We are going back to our real job, back to proper work! It’s almost crazy to say that we’re going to feel useful again, back on the tools as it were. We were back at work in the yard three weeks after the start of containment but the closer we got to the end of confinement the more the desire to go sailing really ratcheted up. Not going sailing in the weather we had was a real penury." 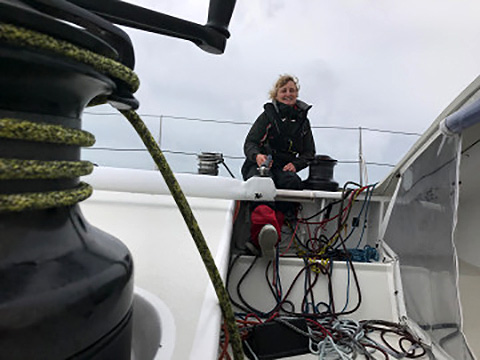 For some this period has proven very costly in terms of their schedule slipping. Briton Pip Hare reports on her work on the Superbigou, (now Pip Hare Ocean Racing)  “When the COVID lockdown happened, we had just started to spray the decks of SuperB and literally had to just down tools and walk off the job for a while. It was like the refit of the Mary Celeste. But we have had to readjust the way we have been working, but that meant we could still progress but very slowly. I have been into the boat shed for some time every day, doing jobs - but it's a drop in the ocean compared to what we should have achieved but it made me feel better. Basically the programme has fallen behind by about six weeks. We are just starting to ramp things up again, and hope to launch early June. More than anythingIt's put me back in terms of my training , I never expected to have six months off from sailing. My aim is to try and be ready for the Vendée Arctic Race, but if I don't make that then I will just go and train in the Atlantic without a race. Whatever happens from here, I know I need to hit the ground running (like I wasn't running before) but the one real confidence is that Superbigou is a tank, and I got such a lot of miles in last year I just need to get back into it again and I think we'll be good."

Light at the end of the tunnel

"The positive thing for use from the confinement, is that we did some of the things we had planned for later on, but really the period was stressful," sums up the Vendéen skipper Sébastien Simon (Arkéa-Paprec). "I am not someone who is into having to adapt, I like to be in control of my time, to prepare myself in an ordered, programmed way. It's been six months since the boat has been in the water and that is took much now. But I have the think there is now light at the end of the tunnel. I have only one thing I want to do: to go to sailing, a long way and for a long time!"

Germany's Boris Herrmann (Malizia II) relaunched his IMOCA on May 20. He tells is it was due to go back in on 6th April. "As it is we could not have gone sailing anyway so we can't worry about that now." His VPLP-Verdier design now has a new rounder bow, new generation foils, new electronics, everything has been reinforced, it has new fibre optics and new sails from Quantum Sail. His team will sail the boat initially as Boris and his wife have a baby due (their first). Herrmann was married  on March 19th - they were the last couple to marry before lockdown and his new foils were the last thing out of Multiplast yard before lockdown.

"Right now I am impatient to be back out on the water but really, otherwise, everything has gone well, we had two or three guys working most of the time at the base, but we have nothing tested right now and so a lot to do. I will test 10-15 June and then do a longer passage, maybe the Vendee Arctic race, we wil see."

The relaunch of Groupe Apicil has been delayed too. It was scheduled for May 10, Damien Seguin will  have to wait a little longer before he can expend some of his pent up latent energy and go sailing. The French double Paralympic champion feels he has not fared too badly: "This whole period will have made a real difference between boats ready early and those ready later. I’m lucky, I got my sponsoring partner early and my boat early. I am satisfied with my general preparation and planning during the last three years, that includes  the boat, my personal preparation and the stories created with the sponsor: I am very satisfied. One big task it to actually find the words to thank my technical team who worked so incredibly long and hard."


What about the more recently launched new gen boats? Nicolas Troussel, whose Corum went in for the first time on May 5 confirms he will need to adapt his original programme: ​​"Everything was set up from the outset so that this project can be successful form a late launch. This has all moved things around a bit but we will do as much as we can. The Vendée Globe is not a sprint. I have lots of new things to discover during the race. The main objective is that I can start the race serenely and calmly. In that respect in my corner I have Mich (Michel Desjoyeaux) who knows the game." 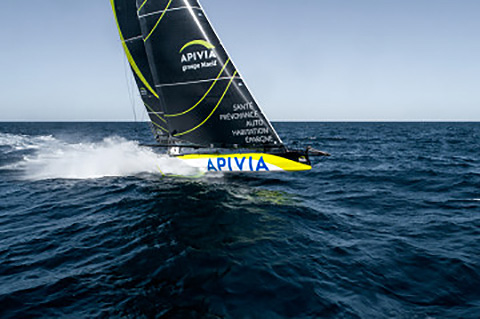 Apivia is launched after four months of refit. Skipper Charlie Dalin says he switches between satisfaction and concern. “We set out with a programme to do two Transatlantics and a lot of miles, and so we have to review what we can do. We are fortunate to have a well found boat, which completed its first season with no structural concerns (and with a Transat Jacques Vabre victory). We have optimized many things, worked on the reliability and my personal safety. Now the big priority is to get out and test all these changes we have made out on the water."

It would be an overstatement to say that confinement made her happy, but Isabelle Joschke says she has taken full advantage of this locked down period. "I sailed a lot in January in difficult weather conditions and that was in conditions which correspond to November's start of the Vendée Globe and I came back with lots of lessons and development ideas for the boat. Then there was lockdown which we used positively to move the boat forward and carry out structural repairs. As the Transat Jacques Vabre did not go as planned (ABD), I am a bit up against it and so I took full, positive advantage of this period and so in the end we had a really good start to the year! "

In Les Sables d'Olonne, Benjamin Dutreux (Water Family - Oceania Hotels), takes a philosophical view, "It's hard to live two kilometers from the sea and not to see it for a month and half ! Sport, drinks with friends, here in Les Sables d'Olonne everything is done on the water. So I continued looking for new sponsors, I immersed myself in these infamous annoying things that we never have time to deal with, and I got back to work in the yard. I love the technical side, working on the boat. What bothers me is that I have not been able to activate the educational projects that I have planned with Water Family with schools, going into classrooms to talk about sport and protecting the ocean. We are trying to set up things to get things moving during the start of the new school year in September.”

Since May 12, there have been successive launches. The race against time in the lead up to the start line of the Vendée Globe is marked by the first sails to test modifications and updates. Then performances will ramp up, sailing mock solo with some technical team on board, then hard solo miles and speed testing, for some moving towards the start of Vendée-Arctique-Les Sables which is due to start July 4. Qualification for the Vendée Globe is still a requirement for some with boxes still to be checked. Seven skippers must complete a solo course of 2000 miles, as validated by the race director (Alex Thomson, Nicolas Troussel, Sébastien Simon, Sébastien Destremau, Didac Costa, Conrad Colman and Louis Burton). Four have to race and complete the equivalent of a solo Transat (Kojiro Shiraishi, Armel Tripon, Isabelle Joschke and Clément Giraud).