Kiwi star Blair Tuke on trying to win the Race that 'pushes you like nothing else'.

When Blair Tuke looks back on his first crack at The Ocean Race, onboard MAPFRE, he describes it in two words: unfinished business.

His Spanish boat, led by Ocean Race veteran Xabi Fernández, came within minutes of winning the trophy for the first time in Spain’s history – heading into the final leg as one of three teams with a chance of victory, only to be beaten to the line by Dongfeng Race Team.

And, reflecting on the 2017-18 edition nearly a year down the line, Tuke pinpoints the Southern Ocean leg as a key turning point in his team’s mission to win the trophy.

Racing between Auckland and Itajaí, MAPFRE’s mainsail tore in half – and they had to seek shelter and suspend racing at Cape Horn – giving Tuke and co the unique tale of having rounded the Cape not once, not twice, but three times in just one leg!

“You do think back on the milestones like the Southern Ocean – we had a hard time there, with many gear issues and the main splitting in two at Cape Horn, it was a tough experience,” he explains.

“It was pretty disappointing for us in terms of the Race, and that leg really put us on the back foot. But you look back at those moments and realise how well you were bonded together, and we bounced back pretty well.”

Indeed, MAPFRE kicked on from Brazil, and got right back into the running for the trophy – winning the leg from Itajaí to Newport despite running out of food, and taking three podiums from the final four legs.

“Going into the race, you never know exactly how you’re going to react when the pressure comes on and you’re in difficult situations,” he continues. “You don’t get many more difficult situations than being in the Southern Ocean and dealing with conditions like there are down there.

“You learn a lot as a person, you learn a lot operating in a team environment, and seeing how each and everyone responds differently to that kind of pressure. I definitely feel like a much more well-rounded sailor and person after doing the Race.”

The Ocean Race is known as one of sport’s greatest endurance challenges – with the world’s best sailors pushing beyond limits through the most extreme conditions on the planet.

But what happens when the racing stops? Every action has an equal and opposite reaction – and for many, the comedown from the race can be just as tough as the racing.

“It is tough to transition back to normality after the Race,” admits MAPFRE’s Kiwi star Blair Tuke. “You’ve missed out on a lot while you’re away, and your body has gone through a lot mentally and physically.

“It takes a while to get back into a normal routine, and it’s probably the best part of six months before you feel yourself again.”

For Tuke – and his long-time partner, Pete Burling – it’s been a busy few years. A 49er gold medal at Rio 2016 was followed by an historic America’s Cup win with Emirates Team New Zealand in 2017 – and set up the Kiwi sailor for a bid at winning The Ocean Race to complete the ‘Triple Crown’ before the age of 30.

So when the Race came to an end, he took the opportunity to head home for a breather – before turning his attention to new projects, including the America’s Cup, the A-Class Worlds and the Olympic 49er class. 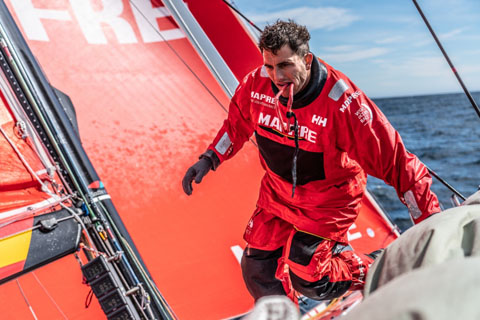 But despite having a packed schedule, Tuke and Burling both admit that they’re watching The Ocean Race progress closely – and are keen to be on the start line in 2021.

“We both have an eye on the next race for sure,” Tuke confirms. “When we finished the last edition, we had unfinished business after what was a brutal finish for both of us. We’d love to go back and try to win the Race, and if we could do that for a Kiwi team that’d be pretty awesome. There’s a lot to get to that point, we’ve got a lot in front of us already and a lot on our plate, but that’s definitely the goal.”

The Ocean Race is all new – a new name, new logo and new boats. But, Tuke says, the spirit of the Race, and the attraction of racing around the world remains the same.

“The Race has changed over the years – but what hasn’t changed is that you’re still racing around the world, and you’ve still got to do it out there in nature, in the elements. That’ll never change.

“You’ll always be pushed, no matter what boat you’re racing on, or how many boats are racing against you. It’s a combination of adventure and competition – and I think these new boats in the IMOCA 60 class are going to be a bit more technology-focused and you’re going to have to push harder to try and have a fast boat, but you’re still out there, trying to get from A to B faster than someone else. It’s going to be an awesome race.”

With super-fast, foiling IMOCA 60 boats, the Race is certainly going to be a spectacle – but there will be less space onboard, and it will be much more demanding of the sailors. Tuke believes that places a lot more emphasis on boat development.

“I don’t think you can push much harder than we pushed last time in the Race – there isn’t much more you can do physically as a human – but there will be bigger speed differences next time, so there’s more onus on having a fast boat at the start of the Race,” he says.

“With less people onboard you’re going to need more well-rounded sailors. Every person onboard is going to have to be able to do the majority of roles, you’re probably not going to have specific people, such as a bowman or a helmsman.”

Kiwi favourite Bianca Cook and Race veteran Tony Rae have already announced a NZ campaign in the VO65 class – but Tuke is keen to see New Zealand represented in both classes in 2021.

“It’d be great to have two Kiwi entries in the Race,” he admits. “New Zealand has an amazing history in The Ocean Race, and it’s something you always follow when you’re growing up, and having that stopover in Auckland really lights up the city. I think all sailors and shore crews enjoy visiting New Zealand, it’s one of the best stopovers.”

He adds: “All Kiwis, whether they’re America’s Cup or Olympic sailing fans, know about The Ocean Race – it pushes you like nothing else.”