Sport acquatici / The Ocean Race - The road to gold The Ocean Race - The road to gold

Team AkzoNobel's Olympic champion Martine Grael reflects on The Ocean Race – and tells us about her mission to defend gold at Tokyo 2020.

Martine Grael is all about challenges.

The current 49erFX Olympic champion, alongside partner Kahena Kunze, has been brought up through the Olympic classes to focus on performance – analysing and optimising ways to squeeze every inch of speed out of the boat (and every last ounce of energy from herself) on the race course, the slimmest of marginal gains being the difference between success and failure.

So it figures that, within just a couple of weeks of crossing The Ocean Race finish line into The Hague last July, she efficiently switched modes, and was back on the Olympic circuit – racing at the World Championships in Aarhus, Denmark – the start of her next big challenge.

Now, after an unforgettable round-the-world journey, her full focus is on the path to Tokyo 2020, where the pair hope to successfully defend their 2016 gold medals next summer.

But she admits that the transition from VO65s back into small boats wasn’t an easy one. “We did the Worlds less than a month after the finish of the Race, and it was a big challenge to come back into Olympic sailing at a high level. I didn’t feel comfortable at all – having to do a lot of racing without the training – but the end of 2018 and start of this year we did a lot of training and we’re getting back into it.”

It wasn’t just about training on the water. Coming out of The Ocean Race, where sailors eat around 6,000 calories onboard daily – but work so hard that they can still lose up to 10 kilos per leg – and where the physical contribution is much different to in dinghy sailing, Grael admits that she had to put in the hours in the gym, ‘gaining muscles on my legs, and losing on my chest'.

She continues: “In Olympic sailing, you have to be very comfortable with your body and with yourself. Gym time is super important, and making sure that you’re well-rested. In that way, it’s very different from The Ocean Race, which is all about doing everything you can on the water, no matter if you’re tired or not. It’s a different mode.”

The 2017-18 edition was a real rollercoaster for Martine and the rest of team AkzoNobel. Some memorable highs, like winning into Auckland, and smashing the 24-hour speed record on the transatlantic leg from Newport to Cardiff – coupled with some crushing lows, including a dramatic dismasting on the way into Melbourne which resulted in the crew spending Christmas at sea, sailing slowly under jury rig towards Australia.

“A lot of things surprised me about the Race,” she admits. “Honestly, I knew very little about what to expect before I did it. When I began Leg 2 (from Lisbon to Cape Town), I’d never been on a boat for more than five days offshore.

“I was constantly thinking ‘how is this going to be?’ – and it was kind of like that for the first five or six legs before I felt like I had an idea of what was coming.”

Indeed, the last race was Martine’s first time competing in the event, but she was no stranger it, having spent her teenage years watching her father, Torben Grael, compete twice – once onboard Brasil 1 in 2005-06, and secondly as winning skipper of Ericsson in 2008-09. 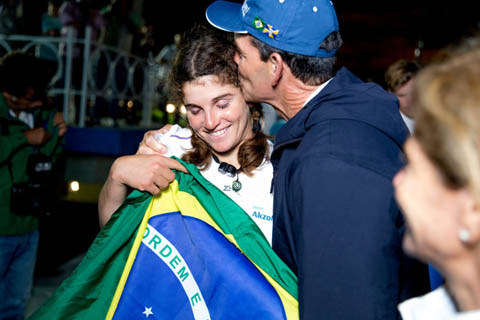 Did the first hand experience of the Southern Ocean live up to the stories?

“Oh, for sure, the leg from Auckland to Itajaí lived up to my expectations,” she says.

“Of course, we had some very tough times, especially losing John Fisher – that was really tough.”

She adds: “Racing-wise, it was absolutely the hardest but also the coolest part of the race. I remember the acceleration of the waves, and it was just amazing. There was always something going on, and the feeling of achievement afterwards is huge.

“Those moments in the Southern Ocean, for me, were the Race. It was pretty wild conditions inside the boat, listening to the sounds the boat makes when you’re trying to get to sleep – and just living in general is hard. But you really feel a sense of teamwork and being together, because you really have to be to sail in those conditions.”

But when you’re in those situations – thousands of miles from land, in places that most people will never see with their own eyes – it’s important to take a breath, and to look around. After all, Grael says, there’s a lot to learn from the world around us.

“Nature has a lot to teach us, and we have a lot to learn from how efficient nature is – and that’s why I have so much admiration for it,” Martine says. 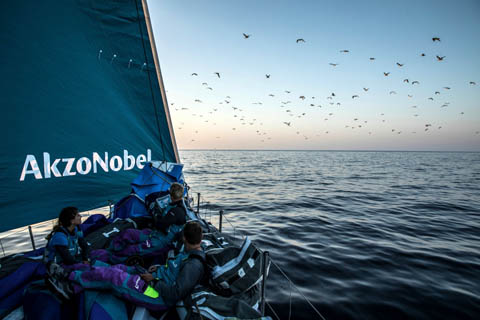 “When you see the wildlife in the Southern Ocean, it really makes you realise how far you are from civilisation – and it’s so impressive how fast the albatross can fly with so little energy spent.

“They just fly around the boat without flapping a single wing, just taking advantage of the wind. When you think you’re going fast, they go faster. You could see they were watching us, and it was really cool to watch them as well.”

With the future of The Ocean Race, in foiling IMOCA 60 boats, set to be faster, and even more challenging than ever before, those albatross might struggle to keep up in future – and Martine says that the next race could be the most extreme yet.

“It was very full-on in the last edition with eight or nine sailors per team… in the new boats, you might have only five onboard, I think that would mean mostly two on deck, so you’d have to have your systems sorted out – definitely not much time for rest!”

With all of these learnings and experiences under her belt, will we see a Grael take on The Ocean Race challenge once again?

Martine has made no secret that her full focus is on Tokyo next year – and admits she hasn’t looked as far ahead as the next race yet.

“For me, it’s all about going after challenges. The next challenge after the Olympics? Who knows,” she says. “But I think everybody deep inside wants to win the Race, and that’s what brings people back. If you have the possibility of winning it, you’ll be back.

“It’s a big project, but it’s something that, in the end, you’re proud of. You grow a lot, personally, and as a team. There’s so much evolution from beginning to end – when you’re in it, you’re like ‘ARGH! I’m quitting tomorrow’ – but then you finish the leg, and you’re ready for the next one.”

So what would it take to bring her back to the Race one day, I ask? “I think you want to be in a good team,” she says. “There are lots of shortcuts you can make by having friends around you, for sure. It has to feel right. I want to achieve things personally, as well as for the team, and it has to be worth it.