Sport acquatici / The Ocean Race - 'The new boats are at the cutting edge of techno... What makes competing in The Ocean Race such an addiction for the world’s best sailors?

Since 1973, many have been asked why they return time and time again to test themselves in one of sport’s toughest challenges. And no-one has put it better than Race legend, Sir Peter Blake.

“You'll hate it, you'll absolutely despise the fact that you're involved – but when you get to the finish, you'll know why,” he replied, when asked his motivations for competing in this brutal Race five times.

“There's nothing like it. It gets in your blood and you can't get rid of it."

This time last year, if you’d have asked a Southern Ocean-battered Kyle Langford whether he’d ever be back in The Ocean Race, it's fair to say that his answer would have probably been a lot shorter and, um, to the point.

“It’s hard to describe just how tough the Southern Ocean is – there’s absolutely nothing that can prepare you for it,” the Aussie sailor explains, almost a year after the end of the Race. “I’d rather go through the Doldrums 100 times than go back down there, it’s not a place where humans belong.

“It’s freezing cold, windy ...just completely miserable. When I found out that Capey and Bouwe had done it 8-10 times, I thought ‘these guys are completely mad’ – what could motivate someone to do that?”

But Langford admits that, now he’s back on shore, dry and fed, he’s already starting to feel the pull of the ocean once again.

“Having spent some time away from the Race, I can now see why people come back so many times ...and I’m itching to go again. I can really see what people are drawn to, being out there in nature, no outside influences except you, the boat and the weather. There’s no greater challenge than that, setting yourself up against the best and trying to beat them.

“It’s funny, when you’re away from the Race you forget all the bad moments – you just remember the good times and the challenging bits, and that’s what pulls you back in again and again.”

Having tested himself in many disciplines of the sport, Langford is hard to pigeon-hole as a sailor. He’s spent the last few months in Palma de Mallorca, sharpening his Moth racing skills – and he’s also competed in two America’s Cups, winning one as part of Oracle Team USA; he’s currently part of the Australia SailGP team, racing F50s; he's raced on Comanche, and in 2010, he won the RC44 World Championships as part of Jimmy Spithill’s crew.

But he admits that when he decided to join Team Brunel and embark on a round-the-world ocean race in 2017, he had no idea what might lay in store for the following nine months.

“The Ocean Race was a huge learning curve for me,” he says. “When I started the race, I’d never even been offshore before. I’d never spent a single night on a boat. Going into a 20-odd day leg knowing you’re going to be on a boat for three weeks straight is quite tough, mentally.

“I look back and wonder how I managed to get through that, not only to survive it, but also to do it whilst competing against the best in the world at a very high level. It’s a very satisfying feeling and I’m proud to have been part of such a great event.” 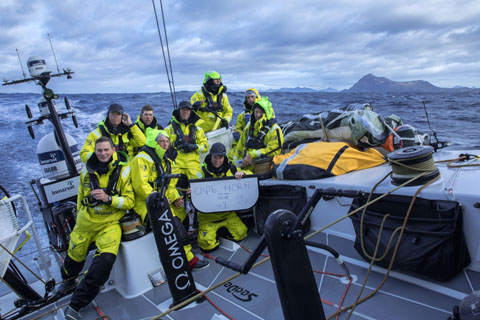 Coming straight into the Race from the in-shore racing of the America’s Cup marked a big step for the Aussie, who turns 30 this year – and it wasn’t just the boats that were different.

“People ask me how The Ocean Race compares to the America’s Cup,” he adds. “The Cup is the Formula 1 of sailing, you have a large team behind you and there’s constant development going on during the racing. Whereas The Ocean Race is more like the Dakar Rally of sailing, you have a team and there’s a lot of work that goes in before the Race, but once you’re out there, you’re on your own – there’s no assistance from the outside. It’s just you and the elements and the equipment that you have.”

Langford explains that, despite having a wide range of experience across the sport, The Ocean Race was a real journey that altered how he approaches professional campaigns and personal challenges.

“I think throughout the Race my mentality changed a lot, and I really changed as a person as well. At the start, I was quite anxious about getting stuff done and wondering what’s next, but then as the Race goes on you learn to roll with it, and chill out. I think it makes you a better person and you deal with unexpected changes better. It really helps to have that mentality shift and it’s what offshore racing is about, you’ve got to roll with the punches and it’s not over until it’s over, which we saw going into the final leg of The Ocean Race.”

That last leg, with three boats – Dongfeng, MAPFRE and Langford’s Team Brunel – all racing into The Hague with a shot at winning the trophy, will go down in history as one of the closest and most thrilling moments in the history of the sport.

And with The Ocean Race introducing new IMOCA 60 foiling boats to mark a new era of ocean racing, Langford believes that the race is only going to get more exciting.

“I think the direction of The Ocean Race is really good,” he says. “I like how it’s attracting a new generation of sailors with the VO65s, and in the IMOCA 60, we’ll probably see more single-handed sailors coming into fully-crewed racing.

“The boats are so extreme, they’re really, really cool and at the cutting edge of technology. Outside the America’s Cup, The Ocean Race is now the biggest development class in the world. The added dimension of foiling is gonna be huge in ocean racing and how you manage that is a huge challenge.”

He adds: “The Ocean Race is tough enough as it is, and throwing these new boats into the mix is going to be a huge challenge for everyone involved.”

The IMOCA 60 boats are smaller, faster and will have even less crew onboard – which will have a huge impact on day-to-day life whilst racing around the world. Langford explains that building a team of all-rounders could the secret to winning the next edition in 2021-22.

“I think the key difference in the next race is going to be the personnel you have onboard. You really need all-rounders – people who can do every position onboard. Gone are the days when you have a specific pitman, bowman, trimmer or helmsman – you need everyone to be able to do everything to a very high level.

“The type of sailor you’re looking for needs to be able to do everything from the mechanics of the boat, the boatbuilding, sail making and the shore side of things as well, because when you’re out there there’s no one else to fix it for you, and you’ve got such a small amount of people onboard you need to be able to cover every area.