Former The Ocean Race skipper Dee Caffari talks about ocean health and her plans for the next edition of the Race.

Dee Caffari skippered the Turn the Tide on Plastic boat in the 2017-18 edition of the race. Alongside trying to win the coveted trophy, part of the team’s mission was to raise awareness about the extent of and urgent need to tackle the ocean plastic crisis.

The crew became scientists, pioneering the collection of valuable oceanographic data for the Race’s Science Programme, carried out in collaboration with Premier Partners 11th Hour Racing and Volvo Cars and Official Partner Bluewater. The data was recently presented at OceanObs ’19, a leading ocean science conference. 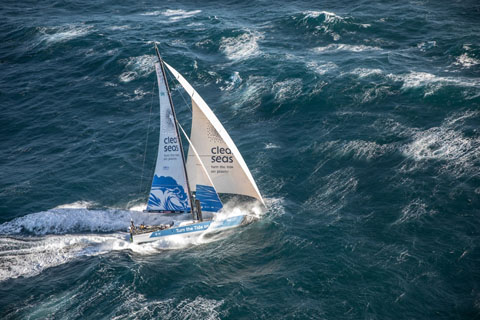 Hi Dee. Why did you attend the OceanObs19 conference?

Giving the keynote address, I wanted to highlight the need for greater collaboration to capitalise on opportunities to help reverse the harm we have done, and are continuing to do, to our ocean. We need to maximise opportunities to gather data and gain a better understanding of ocean health through scientific research. I showcased the cutting-edge work we carried out on Turn the Tide On Plastic around microplastic analysis and the deployment of drifter buoys to improve weather forecasts and better understand the vastly under sampled ocean.

What are your thoughts on the scale of the problem?

The phrase ‘seeing is believing’ is very true and over the last decade I have seen first hand the increasing plastic pollution in many of the ocean regions I have sailed across. Gathering  scientific data that then became publicly available research has provided crucial evidence, prompting action and change on a global scale. With microplastics found nearly everywhere in the ocean, the reality is much worse than we all imagined and the solutions will be complex. However, by discussing the issues now and identifying actions that will change behaviour, I am confident that together we can still make a difference.

What do you think needs to be done to address the ocean plastic crisis?

We need to urgently address the plastic already in the oceans by reduction and removal because it is having such a detrimental impact on marine health. At source, manufacturing and supply chains need to be challenged so levels of plastic production are minimised. As consumers we have a great deal of power and increasingly people are better informed and more discerning, using sustainable brands by choice. If this trend continues, companies that are not already taking action to reduce their use of plastic will be forced to reconsider if they start losing customers to their more environmentally proactive rivals. 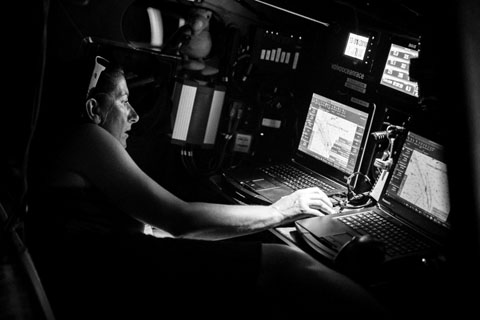 What other pressures should people be aware of in relation to ocean health?

The ocean means so many different things to each of us but we all rely on it for our health, climate, trade, transport and food. As a sailor, it is a privilege to see nature in its natural environment and to see the power of mother nature in all her glory, testing us to our limits. The ocean acts as a barometer for our planet’s well-being and at the moment the barometer is warning us that we need to look after it better.

You carried the message to “Turn the Tide on Plastic” during the last race. How was this received by sailing fans?

They say timing is everything and we certainly hit the market at the right time. It was a genuine communication for the team and so it was delivered with heart, passion and belief. The message was certainly well received and I hope we helped inspire people to make changes in their daily life and be more considered when making decisions as consumers.

What have you been doing to raise awareness of the problem since the end of the last race?

I did not want the momentum to be lost and realised that I now had a voice and a platform from which to speak. I had seen the issues and helped gather the scientific data so I felt I had a responsibility to continue being publicly vocal on the subject. I also realised that, if handled correctly, you can challenge others to make critical changes. One example of this was visiting the Southampton Boat Show where I was shocked over how far behind they were in terms of sustainability. The Ocean Race had shown me that with planning and good communication, changes at public events can happen and the public embrace it. I challenged British Marine to make changes and I am delighted to say that, a year on, a number of these have been implemented.

Do you have any plans to take part in the next edition of The Ocean Race, starting in 2021?

I genuinely love the race and I love being out on the ocean. I would very much like to be involved again and don’t like the idea of the Race going without me. However, they always say that getting to the start line is the hardest part so I have my fingers crossed that another lap of the planet is on my horizon.