The Mirpuri Foundation’s entry for the next edition of The Ocean Race, named “Racing For The Planet”, is a VO65 class monohull racing yacht.
Such yachts, originally designed by Farr Yacht Design, were used in the 2014–15 and the 2017–18 editions of The Ocean Race, and, at 65ft LOA, are slightly shorter than the previous generation of Volvo Open 70s. They are considered, however, to be more reliable, robust and affordable than their predecessors whilst still being a very high-performance racing boat.
The Mirpuri Foundation vessel, “Racing For The Planet”, is numbered VO65-1, being the first built of eight vessels in all, and has a great pedigree, the same yacht winning the 2017–18 edition of the Race, since which it has been completely refitted. 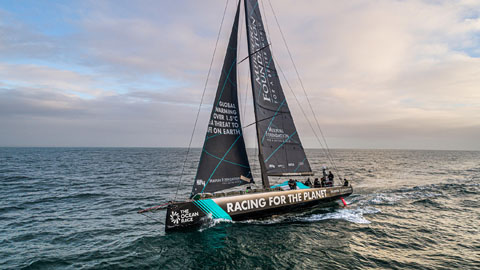 The four-month-long refit of the boat was undertaken by renowned company Trimarine Compósitos Lda. Trimarine specialises in process engineering, construction, systems-design and the fit-out of racing and high-performance cruising yachts.
The company was charged earlier this year by the Mirpuri Foundation with the task of managing and performing a total refit of its VO65 in preparation for The Ocean Race 2021.
Every aspect of the boat has been examined, replaced, upgraded or reconditioned. The refit involved around 6,500 man-hours, from beginning to end, with literally everything being stripped out and replaced prior to the yacht’s delivery to the Mirpuri Foundation for its official baptism, with its “Racing For The Planet” livery proudly on display. The first task performed was an ultrasonic nondestructive test of the vessel undertaken by Trimarine’s long-time collaborators Q.I. Composites. After this, the boat was completely disassembled and all the deck gear was removed and replaced.
The boat’s entire keel was detached before new bushings were milled and fitted. All hydraulics were then checked or replaced by Italian specialists Cariboni, another company of trusted collaborators with many years of top-level racing experience behind them.
Electronics and wiring were replaced and tested by reputed specialist company Diverse Performance Systems, before the mast of the vessel was removed and made state-of-the-art by Trimarine in collaboration with engineers Rig Pro (Southern Spars), the boat’s original mast makers. Then, with all of the technical work finished, the hull, deck and keel were comprehensively repainted in the colours of the Mirpuri Foundation. A new boat was born.
In the paint shop, after existing layers of paint had been thoroughly removed in preparation for the new “Racing For The Planet” livery, all surfaces were required to be re-primed in preparation for the topcoat.
This was a particularly complex job, given the Mirpuri Foundation’s graphic design demands, and called for the use of Akzo Awlgrip Custom Metallic colours and a number of smooth blends between silver, grey, black, blue and green, with several coats of clear lacquer having to be applied over the paintwork to seal the graphics and protect the elaborate design.