At 62 degrees north, some five days and 20 hours into this 2800 nautical miles Vendée Globe warm up race, Ruyant rounded the most northerly mark of the course with a margin of just six minutes over second placed Charlie Dalin, turning at the mid-point, virtual mark of the at 1141hrs CET this Thursday 9th July.  And this afternoon not long after the mark, the top three boats, Ruyant’s LinkedOut, Dalin’s Apivia and Jérémie Beyou on Charal were still  separated by less than three miles.

At four months, nearly to the day, from November 8th’s start of the Vendée Globe, this summer’s one and only IMOCA ocean racing dress rehearsal is delivering on its promises.

After all of the time and racing lost to the global virus pandemic, the Vendée-Arctique-les Sables d'Olonne race was designed to fill in the gaps, to give sailors a chance to get back racing, to measure themselves in the final build up to the solo race around the world, to validate their machines and the changes they have made to them. And it is designed to offer final qualifying racing miles to the solo skippers who still need them.

So far these five days climbing north, racing to within 250 miles of the Arctic Circle have already offered the valued, critical testing miles in a variety of conditions that have been absent this season. Weather conditions in recent days have been almost wintry but blessed with the endless hours of daylight the northern latitudes offer in summer. In short the weather alone has been representative of the Southern Ocean. Of the twenty starters three have retired with technical problems and today 245 miles separates the first from 17th placed Clément Giraud on Vers un Monde Sans SIDA.

A test of weather and strategy 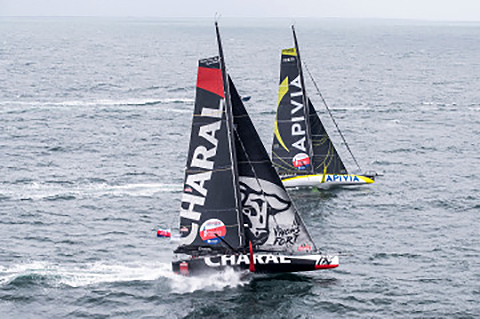 “The lead groups went through two depressions. The later runners three. The conditions were demanding and varied: they had big seas they were reaching with more than 35 knots of wind, a little bit of downwind, lots of upwind and some light weather. And now on the way back it will still be very complex strategically. There will be a depression to negotiate, choices to me made and risks to manage. There are different points of sail to improve. On a course like this, you cross the weather systems and it is an excellent preparation for the Vendée Globe "summarizes Jacques Caraës, race director of the Vendée-Arctic and the Vendée Globe.

A test of manoeuvres and processes.

Among the many tests and challenges brought on by the big range of conditions and points of sail is the need to make many changes of sail area and configuration, of ballast deployment, keel cant, foil settings as well as tacks and gybes. The whole depth and breadth of the sailor’s game seems to have been well tested. And the net outcome will be a much more refined playbook, a more intimate knowledge of repeatable fast settings and set ups. The ‘polars’ that is the theoretical target speeds for each wind speed and angle will be ever more refined, very useful information in terms of keeping up high average speeds over prolonged periods on these IMOCA 60s.


Three competitors have been forced to abandon the race. Damien Seguin (Apicil Group), with a damaged support bracket for his alternator, Sébastien Simon (Arkéa-Paprec) snapped his starboard foil and Armel Tripon (L'Occitane en Provence) had structural damage at the front of the hull.

Tripon and Simon started the race especially to validate their qualification for the Vendée Globe. They still have the opportunity to do so but must now complete a substitute 2000 mile solo course before September 15. These three are the only race ending problems so far but there are many smaller glitches among the fleet, reported or not. There has been a mainsail hook problem for Kojiro Shiraichi (DMG Mori), mainsail track for Kévin Escoffier (PRB), pilot problems for Isabelle Joschke (MACSF)

"Everyone has probably had problems and learned from them.” confides Jacques Caraës “These  will have a practical value for those who have done this race will have identified the problems and can resolve them to become more reliable. ” “It is has been hard for the leaders and great for the followers and race fans.”  Comments Christian Dumard, weather guru who is responsible for the supply of the race weather, as he surveys the July 9th charts.

This Thursday morning Ruyant and Dalin clashed a few hundred meters from each other, in an attempt to capture the Ulysse Nardin Trophy for crossing of the northernmost point of the race. Six minutes separate the blue boat from the yellow boat and less than an hour in their wake Beyou was poised on Charal. These three long time rivals have shared the lead during the first half of the race, tiny differences evident,

The three state-of-the-art boats are at the top of the favorites list. The only Manuard design among these latest generation racing boats, L’Occitane en Provence was impressively fast and would likely still be among the top group if he had not given up.

Behind, the fight is just as intense and close between five older foiling IMOCA boats which are all very fast: Sam Davies (Initiatives Coeur), Kévin Escoffier (PRB), Boris Herrmann (SeaExplorer- Yacht Club de Monaco), Isabelle Joschke (MACSF) and Yannick Bestaven (Maître Coq) all compete within  twenty miles of each other in front of a second peloton of five boats from Fabrice Amédéo (Newrest - Art and Fenetres) to Giancarlo Pedote (Prysmian Group).

It is the mid point… so five more days of racing 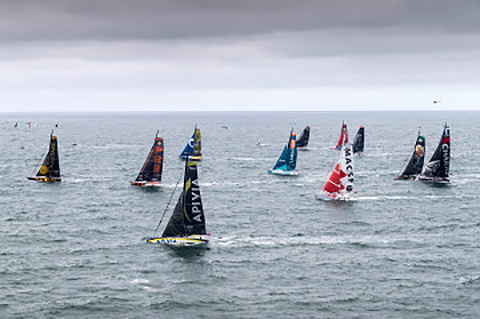 The high pressure bubble crossed by the fleet off Iceland is compressing the gaps, making any settled order still very uncertain. There are still 1500 miles to race to the finish line of this now shortened course via the Gallimard mark 400 miles west of the Vendée coast. The first finishers of this great Vendée Globe rehearsal may yet coincide with France’s National Day 14th July. Fireworks may yet be on the horizon.