Andrew ‘Animal’ McLean is both a highly experienced inshore and offshore racer as well as a qualified mechanical engineer. He has a vast amount of experience, having competed for four America’s Cups and in two editions of the Volvo Ocean Race (VOR). All that experience in both sailing and engineering has led him to his current role as Lead Systems Engineer at INEOS TEAM UK.

Although born in New Zealand, that is not where Andrew first fell in love with sailing. “We left New Zealand when I was one and we moved to Brunei. My Dad went there as an engineer and my Mum got a teaching job at the International School we attended. I grew up there until I was nine. That’s where I first started sailing, it was uncommon around there, but we sailed quite a bit, cruising around the islands in little 28 footers on the weekends.”

At the age of nine Andrew and his family moved back home to New Zealand, to Wellington. There, inspired by his father, his passion for sailing took on another level.

“Like most New Zealanders my Dad always owned a boat. Nothing flash but something we could always go sailing in. In Wellington my dad owned a keelboat, a 30 footer. We’d sail in them and race them. We used to race in the winter series. Those were some of the biggest waves I had ever seen – I remember being terrified sometimes!"

After years of sailing as a hobby Andrew’s road into a future in professional sailing began when he joined the Royal New Zealand Yacht Squadron Youth Training Programme – a well-trodden route in New Zealand.

By that point Andrew knew his dream was to work in the marine industry and in particular in sailing. He opted to study engineering in Auckland due to the strength of their yacht research programme. He quickly educated himself in relevant fields such as computational techniques, engineering and composite engineering. At the same time, he began working in Auckland’s world-renowned marine industry with North Sails Group and Southern Spars. 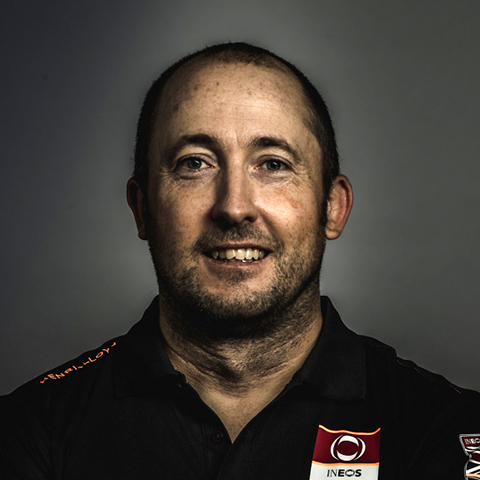 Andrew’s hard work immediately paid off when straight out of University he was offered a dream job, he was hired by Emirates Team New Zealand (ETNZ) in 2001 to write the visualisation tools for the weather team for their America’s Cup Challenge. The role with ENTZ was the start of a pattern for Andrew. A pattern of sailing and racing, while working at the cutting edge of technology and development.

“I did a couple of days sailing with them, but I was about 75KG and not physically strong enough. I was blown away by those boats though and sailing with the best in the world with the national flag on our gear was something I really wanted to do more of”.

After the 2003 America’s Cup, not a particularly great Cup for the Kiwis who ultimately lost 5-0 to the Swiss team, Alinghi, Andrew went back to Southern Spars and worked on several R&D projects. When the campaign for the following Cup kick-started again, however, Andrew knew exactly what he wanted; to challenge for the Cup again, but this time as a full-time member of the sailing team.

“I joined the next campaign with ETNZ very early. I got a job straight away doing reconnaissance but when I had a meeting with Dalts [Grant Dalton, CEO at ETNZ] he asked me what I wanted to be doing and I immediately replied, “I want to be a sailor”. He said “you won’t get on the boat unless you’re 100KGs” so that’s what I did. I went away and I trained like hell. I was putting on about half a kilo a week. I came back to the team at 100KG and then Dalts had to give me a sailing role!”.

The 2007 America’s Cup was more successful for the New Zealand team, losing a close-fought rematch with Alinghi 5-2. By now, Andrew was well established, and signed again for the next Cup cycle. Due to a row over format, rules and boats which lasted for three years, however, that Cup was significantly delayed. Andrew had no choice but to move on. After a stint in the Extreme Racing Series he moved to fully-crewed ocean racing and sailed in the Volvo Ocean Race (VOR) with Ian Walker.

“I'd always wanted to do ocean racing. I did a lot of distance racing out of Auckland. It was a lot of fun. I’d always done quite a bit of navigating, and I’d spent a lot of time with the weather teams [at ENTZ], so I had quite a good handle on that side of racing. I had experience running and maintaining complex systems and enjoyed working hard so the endurance racing was a perfect fit.”

After two Volvo Ocean Races Andrew found himself once again, in 2012, returning to the America’s Cup with Swedish team Artemis Racing to work on the system control software.

By the end of the 34th Cup, Andrew had another choice between carrying on to the next Cup or going back to offshore racing. “I was really tempted by the VOR again especially with some exciting teams announcing, but I got a phone call and they said, ‘Do you want to do the Cup with Ben Ainslie Racing?’ I said yes. The thought of designing and building a new development class from scratch was attractive.”

“I signed as a sailor, but quickly got involved in the design side offering feedback and input from the sailing side, it got a bit out of hand from there, eventually leading the systems group.”

Andrew’s remit with the team now sees him look after the control systems on board Britannia. That includes the hydraulics, the electronics and all the foil actuators. In short, he manages all the control systems that keep the sails under control and keep the boat in the sky when foiling. For Andrew, who’s career in sailing has seen him work on both the sailing and the engineering side, it is a perfect role. 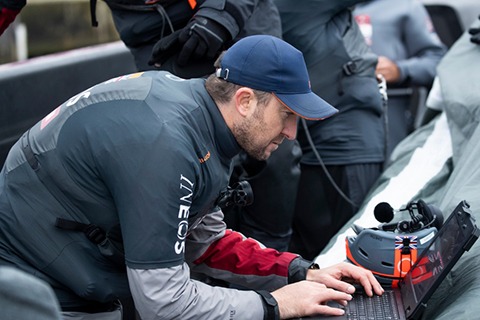 “In an America’s Cup team it is critical that there is a link between the technology side and the sailors, that is my role now. That technological side of the America’s Cup is more important than ever before with these AC75s. The control systems on board used to be just a couple of wires measuring the wind and now it’s almost life critical hardware in that if it fails, people get injured. There’s been a massive shift.

“The America’s Cup, of course, is fundamentally still a yacht race but it’s a bit of a departure from mainstream sailing. The Cup has always been on the cutting-edge of technology and these yachts now are more akin to Formula 1 cars or fighter jets. It’s very complex but also very rewarding from an engineering point of view.

“On the AC75s, for example, there are control systems that control the flaps on the wings, the rudder elevator at the back, the board arms, and then within the wing there are probably ten or so more control functions. There are about 26 hydraulic actuators on boat. There is a lot of intricate work to do, from all the hydraulic work through to working out the balance between what the sailors are controlling and how they interface with those machines, and what the computers are controlling”

The level of complexity means that there is simply a tremendous amount of work to do to ensure the boat is as reliable as possible. The number of tasks on Andrew’s job list can run into the thousands. Ultimately, as is always the case in the America’s Cup, if there is one thing Andrew would want more of, it would be time.

“In the America’s Cup you simply run out of time. Everyone does. It’s all about how efficient you operate as a team in the time you have that will win the Cup for you. It’s about the teamwork and the 150 people all working together for a common goal. The overall goal may be clear but if everyone is not clear what they are doing on a week-by-week basis, that is where teams can stumble. If one cog in the wheel misses something, the whole machine stops. If one small piece of metal is floating around in the control systems, we could lose a sailing day. My job list can be very long but it’s all about picking out what’s important at any given time whilst anticipating what other people are working on to make sure you do not hold anyone else up. 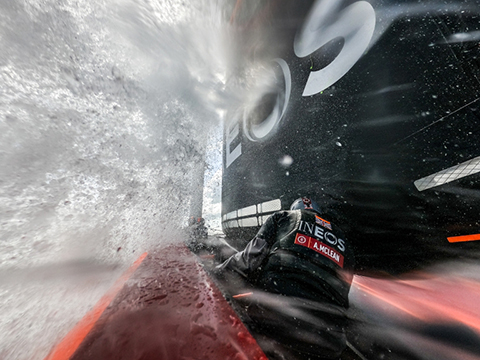 “In the old days I could look at an America’s Cup boat and know how everything worked on that thing. Nowadays the boats have moved on so far that it has to be a real team effort across the board to get it working reliably. In the end it’s that team environment that wins you the America’s Cup.”

The America’s Cup may be a complex team challenge that requires a huge amount of effort and hours but for Andrew, who has been preparing for this his whole life, it is exactly the type of challenge he enjoys.

“We are in a competition and everyone in the team is motivated and driving towards winning the Cup, I find that fun to be around. Then alongside that the technical side of the sport has always appealed to me. I saved up for that first dinghy and then worked on it with dad in the garage - we stripped it down and worked out how to make it better and faster, the whole process of developing and racing was fun. There is that whole side to sailing and that’s what I enjoy the most.”

• Hydraulic systems
Hydraulic systems use fluid to transfer energy and power throughout the boat, creating mechanical movement using cylinders and pistons.
• Actuators
In hydraulic systems, the actuators convert the energy stored in the fluid’s pressure into mechanical power.
• Board arms
The long arms that elevate and control the movement of the T-foils relative to the water.
• Rudder Elevator
The hydrofoil mounted on the bottom of the rudder, creating a lifting force that can be controlled by the rake of the rudder relative to the hull.
• Traveller
Part of the control system for the soft-wingsail (the biggest sail on the boat), it helps control the angle of the wingsail to the wind, and the amount of power the wingsail generates.
• Runner
The runner or running backstay is part of the rigging and helps to support the mast against the loads applied by the sails
• Mainsail
The mainsail on the AC75 is the soft, double-sided wingsail, the biggest sail on the boat.

Having to withdraw from last Autumn’s Transat Jacques Vabre was not the optimal s...
^ Torna Su ^
Altri titoli