Sport acquatici / Building the next America's Cup and its legacy Building the next America's Cup and its legacy

With the 36th America’s Cup less than 90 weeks away, Auckland’s waterfront is quickly transforming to become the hub of America’s Cup action for the event in 2021 and to leave a long-term legacy for Aucklanders and visitors.

The Viaduct Harbour is already one of New Zealand’s most vibrant tourism and entertainment precincts, but what will be delivered in 2021 will expand the redevelopment and growth of the area across into the Wynyard Quarter.

History is indeed repeating itself. Exactly as it happened after Black Magic’s victory in 1995 - when in just a few years the Viaduct was transformed from a dilapidated fishing port to a buzzing social and cultural hub- the Wynyard Quarter is going through a similar transformation.

Since the victory of Emirates Team New Zealand in Bermuda in 2017 the team, the Government and the Auckland Council have been working relentlessly to fast track and reform the area that has been dominated by what has been known locally as 'the tank farm'.

Wynyard Edge Alliance (WEA) - the organisation formed by the New Zealand Government and Auckland Council to deliver the infrastructure required for the event -is actually ahead of schedule.

The next handover on the project is just a few weeks away - early August – when  the first two building pads for the syndicate bases on Wynyard Point will be delivered. These bases will be occupied by NYYC American Magic and INEOS Team UK.

On Hobson Wharf the extension that will house the Challenger of Record, Luna Rossa’s base is well advanced and will be delivered in October 2019. WEA has already installed 84 piles that were  progressively fitted with precast panels and, as these are installed, concrete is being poured over them to form the deck.

The infrastructure build project for the 36th America’s Cup has been underway for more than 12 months and over this time other visible progress has been made.

The very first visible change for Aucklanders was in October 2018, when 12 tanks from Wynyard Wharf were removed to make way for those first two America’s Cup team bases. The second big milestone was delivered only six months later in May 2019. In those few months  a new floating infrastructure, including pontoons, had been installed. The new breakwater alongside Hobson Wharf, that will ensure the water in the outer Viaduct Harbour is calm enough for race boats to be launched safely has been delivered as well. 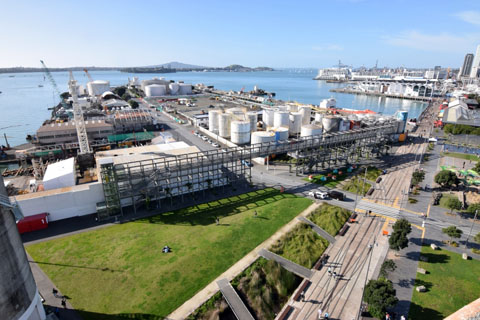 More structures will be delivered in 2020. The construction of the final team base will begin in late 2019  once the remaining tanks have been cleared as well as the construction of another breakwater on the eastern side of Hobson Wharf to protect the New Zealand Maritime Museum collection.

The common vision of Government, Auckland Council and Emirates Team New Zealand is for the 36th America’s Cup to be an inclusive event, with a waterfront that will allow an experience accessible for everyone, connecting people to boats, bases and events, in a linear village that will spread across the waterfront from the Eastern Viaduct, to North Wharf and Wynyard Point.

Part of the vision looks far beyond 2021 and will create new open spaces for people overlooking the harbour. Extending the team bases to Wynyard Wharf opens up Wynyard Point to the public, leading the way for the future redevelopment of the regional destination park which will start in 2022 onwards. The permanent land and water spaces will create a legacy for existing and future water-based events making it easier for Auckland to bid for large international events.

All of this is coming together quickly and it’s highly possible that visitors who have not been in Auckland for a while might struggle to recognize its waterfront in less than two years time.