Looking back at some of our classic Riviera adventures, we remember earlier last year when the team at R Marine Jacksons at the Sandringham Yacht Club, Melbourne, organised an exclusive four-day trip to Wilsons Promontory and Lakes Entrance, finally arriving at Metung for a classic Riviera raft-up.

The cruising grounds of Port Phillip Bay are so pleasant and Bass Strait so wild that it can be rare for one to venture through ‘The Rip’ of water that separates the two. But with more than half a century in the marine industry, R Marine Jacksons is the ‘go-to’ Riviera dealership for Victorians who wish to take their motor yachts beyond the Bay. 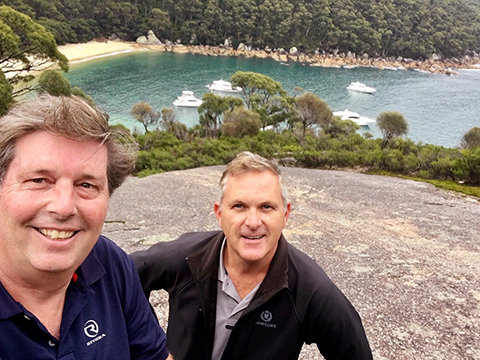 Alongside five Riviera yachts filled with friends and family were Phil and Sandra Cozens on their Riviera 4800 Sports Yacht Persistence II, accompanied by their four-legged crewmate, Buddy. Boating is nothing new to Phil. He bought his first boat at the age of eight for £8 and has owned a dozen more since. Now aboard Persistence II, Phil turned to R Marine Jacksons to gain even more nautical experience and realise the potential of his newest luxury motor yacht.

“The 4800 is the cream of the cake for me,” says Phil. “It’s very well appointed for a family, with sleeping facilities for at least five people. It’s got everything you need on a boat to go cruising for two to three weeks, a generator and all the facilities and appliances you can think of. I can take it anywhere; it’s better than having a unit. If you’re thinking of buying a holiday home, I’d suggest buying the biggest boat you can instead.” 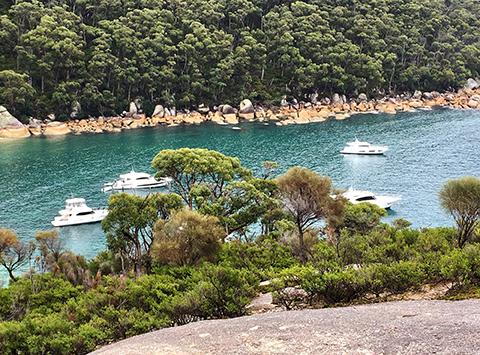 From Sandringham Yacht Club the fleet took six hours cruising at 27 knots to arrive at mainland Australia’s southernmost point. They moored for the night at Refuge Cove on the eastern side of Wilsons Prom. Accessible only by sea or foot, the cove is a welcome sanctuary for mariners – a safe, comfortable and picturesque anchorage in Victoria’s largest marine national park.

“We had a great barbecue there all together on the beach, even Buddy. He’s got good sea legs and gets up in the helm with me to look out. The visibility from the helm of the 4800 is fantastic. He just loves it.” 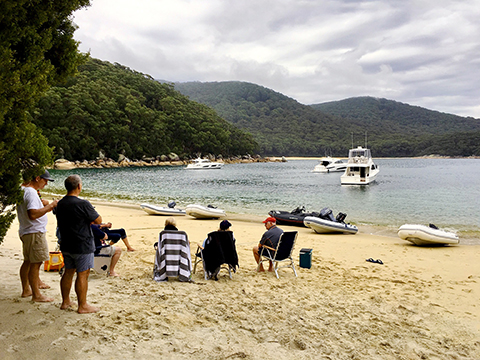 A barbie ashore in the Wilsons Promontory National Park

Next, the fleet continued east, covering roughly 100 nautical miles to Lakes Entrance. Australia’s largest inland network of waterways is situated on the edge of Ninety Mile Beach where the Gippsland Lakes meets the Southern Ocean. Once inside, they turned left to head westwards to Metung where the six yachts rafted up with a couple more Rivieras from the Gippsland region.

“Metung was a very good stop; it’s just a little country town on the water and the facilities are good. We stayed there for a few days, and then the weather blew up.”

Cruisers’ plans are written in the sand at low tide, the saying goes, and so it was for this crew. They headed back to Melbourne by land and returned the following week to sail their boats back, this time without friends or family, only each other and with the support of Stuart’s team.

On a 4800 Sports Yacht named Dory, this presented an exciting opportunity for Sergio Cinerari. 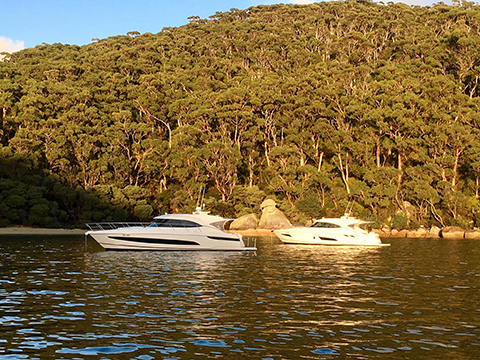 The sun sets after another marvellous day on the water

“The beauty of it was that David Prior came back with us. He’s a skipper Riviera engages with and he imparts a lot of knowledge in the process,” says Sergio.

“It was a great trip back, very fast. We left Lakes Entrance at around 7am and were back in Sandringham at around 4pm with the whole run at 29 knots – we were using about 6.6 litres of diesel per nautical mile.

“It’s not an area of the coast that we normally get to. Just the fact that we travelled along a part of Bass Strait helps you build confidence. On the one hand, it’s really interesting and the other hand you’re learning something new which is good.”

Phil agrees: “Stuart and his team encourage you to use your boat and go out with confidence. They’re exceptional and you know you’re in good hands with whatever you do. The camaraderie built up around this makes it a very pleasant experience all round.”

The Wilsons Prom and Lakes Entrance trip has left Sergio, for one, wanting more.

“I’ve already signed up for round two,” Sergio says. “And this time I’ve taken a bit more time off so we can hang around the lakes area and explore for longer.”

Riviera Australia encourages all owners and skippers to observe their local authority guidelines regarding boating and boating restrictions at these times.