Vendée Globe - Back to Earth. French Astronomer Thomas Pesquet Sails the Atlantic on an IMOCA

The well known French astronaut Thomas Pesquet docked back in Lorient at the weekend to be welcomed by a crowd of admirers after crossing the Atlantic back from Salvador de Bahia, Brazil helping with the crewed delivery back to France of Sam Davies' Initiatives Coeur. He was happy to share the details of his experience after his first trans-oceanic passage on an IMOCA, to discuss the similarities between space travel and solo and shorthanded ocean racing and to highlight his admiration for the Vendée Globe sailors.

A baptism by fire, a first crossing of the Atlantic...

"I am really only a Sunday sailor but I hae enjoyed it and profited from the experience. To date I had only really done one night at sea offshore. Here, sailing across the Atlantic I learned about sailing and racing these IMOCAs, the minimal comfort, the two hour watches. In comparison life on the space station is much easier. Physcially we have more space, we are dry and are not constantly buzzing on high alert."

"Life on board was not a problem for me. I have ro say I was well looked after and in really good company with Tanguy (Lamotte), David (Sineau) and Anne-Claire (Le Berre), all solid, reliable sailors. I tried hard to acquit myself well, being careful not to break anything or do anything silly."

Space and the open ocean, what is there in common?

"The one thing which I think is common to both is the sense of open space and of freedom but while still being cocooned in relative safety. In both cases you are in a world which is not available to very many people at all but which gives this feeling of freedom but we need the safety of our craft. In both cases, there is this double sensation: we are in a world that is not necessarily accessible to everyone, which gives a real feeling of freedom, but to do this we need a safe base in which there is not much space." 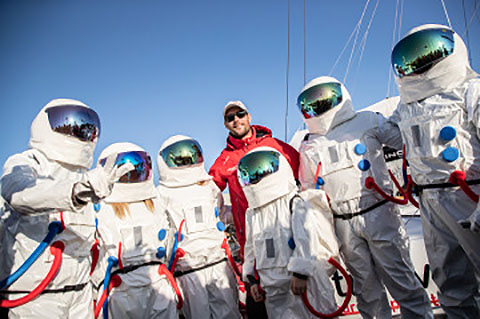 "In space, except when you take off with the rocket, you don't have the sense of speed. The space station revolves around the earth and everything is fluid, it is not hampered by the atmosphere. At sea progress requires effort and you have to work hard, to fight for that progress. On this Atlantic crossing you became more aware of the scale of things. On the Space Station you'd cross over the Atlantic in ten minutes. Here, from Brazil to France, it took us two weeks. And in this world at home where everything is wanted immediately in real time, and everything seems destined to go faster and faster, it feels good to slow down and to take your time. It puts things back in order.

"On Initiatives Coeur we were four up and I feel like we never really stopped working, there was always things to do. But even so we slept really well when the others were on watch. I can imagine it is different solo where you have everything to do yourself. You have to manage everything indpendently. I can imagine how much more pressure that multiplies when you are solo."

The sailors of the Vendée Globe?

"I can imagine that the general public does not fully realise the efforts that these men and women make. They have to manage not just the physical fatigue but also psychological stress and fatigue. And then there is the remoteness and solitude and always the feeling that you can't make any mistakes. The physical danger is always present. You fall in the water at 20 or 30 knots it is over. I have such tremendous respect for these sailors who go to sea for several months in the most hostil corners of the world's oceans. Personally I know I could not do it. So we need to get the message out there that what they do is extraordinary. It is exceptional.

French astronaut 41-year old Thomas Pesquet was born in Rouen and trained as an aeronautical engineer. In 2009, he was one of the candidates chosen to take part in the European Space Programme. He was the tenth Frenchman to go into space and stayed aboard the Space Station from November 2016 – June 2017. Named as UNICEF ambassador for climate change, he recently became patron for the Aviation sans Frontières charity.