Stockholm, Sweden, 31 December 2021: The Mange Olsson Foundation has announced Martine Grael is the 2021 winner of its prestigious Magnus Olsson Prize.

Awarded annually to an individual who has made an indelible contribution to the world of sailing, previous recipients include Torben Grael, Sir Ben Ainslie, Stan Honey, Santiago Lange, Grant Dalton, Carolijn Brouwer and Peter Burling.

Martine Grael, from Brazil, is one of the best skiff-sailors in the world and won the gold medal in 49erFX in the Olympics in Rio de Janeiro (2016) and in Tokyo (2020). 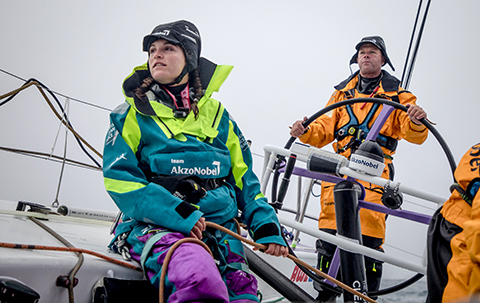 Leg 9, from Newport to Cardiff, day 2 on board Team AkzoNobel. Martine Grael and Chris Nicholson on deck in the white out. Visibility is with boats close by but out sight the crew try to keep the focus and make gains. 21 May, 2018.
© Konrad Frost/Volvo AB

“My clearest memory with Magnus comes from the Volvo Ocean Race in 2008-2009 when he was the skipper of Ericsson 3 and my father (Torben Grael) was skipper on Ericsson 4,” Grael said. “During the hospitality sailing at one of the stopovers, Magnus took some clients out and I managed to grab a ride on the boat. He was such a personable and upbeat guy who made a genuine connection with his crewmates and the sponsors on board for the day. Of course, I’ve heard so many stories about his as well, and it seems he made everyone feel special.”

With a father who has competed and won at the top levels of the sport, it was natural for Martine to try her hand at sailing. After a few youth events in the 420 class, she graduated to Olympic class sailing in the 470 class, ahead of the London Olympic Games, but couldn’t qualify for the regatta.

“After the disappointment of not qualifying for London, I decided to change classes to the 49er where I have stayed until today,” Grael said. “I have competed on the international circuit in the build-up to the Rio and Tokyo Olympic Games. These were great years – performing at all the test events and winning several podiums at the world championships. 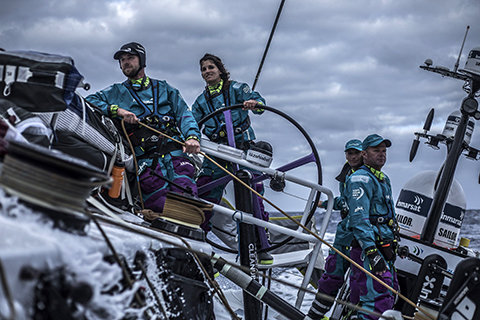 “After the gold medal in Rio me, and my 49er teammate Kahena Kunze, decieed that we needed a distraction. And since the 14-15 edition of the Volvo Ocean Race, with the all-women Team SCA that made a big impression on me, I had been looking for an opportunity to move into offshore racing.”

In the very next edition of the event in 2017-2018, Martine got a chance as a crew member on Team AkzoNobel – and she became the first Brazilian woman to compete in the Volvo Ocean Race.

“That was a perfect way to re-charge, by facing a new challenge in one of the iconic events of our sport. I learned so much – not just about sailing but also about myself. The Ocean Race pushes you to find new limits. And after that I turned straight back into campaigning for what would become my second Olympic gold medal in Tokyo.”

At the age of 30, Martine Grael has the track record of being a true winner and has demonstrated the strength to deliver a top performance when it matters most across several disciplines of the sport of sailing. With a winning mindset and a caring approach, she is an inspiration to people of all ages in Brazil and across the world. Just like Mange, her ongoing dedication and love for the sport of sailing is helping to grow the sport and make a positive difference.


The Mange Olsson Memorial Foundation was created to continue the essence of enthusiasm, passion, and determination that Mange (Magnus) brought to the sport of sailing. In his spirit the Foundation aims to inspire and support young sailors in Sweden, as well as reward international sailors who develop our sport at both a human and a competitive level. The Foundation will also enable a network for young sailors to exchange experiences with the more established sailors. The Foundation is financially supported by companies and individuals who wish to ensure that the values that Mange embodied, continue to live on. mangeolssonsminnesfond.se

Vendée Globe - Germany's Riechers on a good course for 2024