Sailing with boatbuilder Will Stirling to a forbidden island in a classic, clinker dinghy.

Mayflower Marina to Drake’s Island, round it and then back, is all of about… two miles? So it was rather touching that Will Stirling and I had a send-off for our mini adventure; a farewell committee of young men in colourful tracksuits half-heartedly threw stones at us from the harbour wall as I rowed us out of the harbour into Plymouth Sound, Will counting each stroke as a tally of sacrifice: we share a deep loathing of rowing. Once out though, we had June sunshine, light airs, a bit of ebb under our keel, and an exciting destination: the historic, deserted, spooky Drake’s Island in the middle of Plymouth Sound. 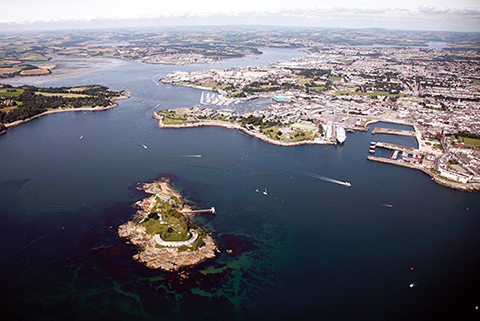 Aerial photo of Drake Island with Plymouth in the background. By Patrick Roach

Drake’s Island is a 6½-acre rocky outpost, resolutely truculent in hard volcanic rock, and surrounded by low cliffs on three sides, with shallows and jagged reefs ringing it. We felt our way through the shallow waters to its northeastern shore and pulled the boat up on the beach. The island’s known history of human habitation starts in 1135, when the chapel of St Michael (since demolished) stood there, and ends in 1989. Drake anchored off its seaward side upon returning from only the second ever circumnavigation of the world, after Magellan’s crew in the 16th century. It was during Drake’s lifetime that the island gradually assumed a defensive role. The Spanish Armada’s invasion attempt alerted the vulnerability of Plymouth to sea-borne attack, and Drake was charged with the task of fortifying Plymouth and its harbour, a job he started in the winter of 1589/90. Drake unloaded six large cannon from the Revenge and installed them on the east side that overlooked and protected the approach to Plymouth and the inner harbour.

In 1592, the government engineer Robert Adams drew a colour plan of the island, showing a gate and wall on the north-west side behind the modern landing stage. The Napoleonic fortifications that followed have since obscured the island’s Tudor history; these days, it’s a confusion of fortresses, battlements, garrisons, tumbledown buildings, overgrown tunnels and large cannon, pointing forever towards an unseen enemy on the horizon. For the last two decades or so, it’s been mothballed, and I suspect we’re technically trespassing, which, given both Will’s and my own laissez-faire attitude to such things, would not surprise me in the least.

We were sailing Will’s lug-rigged, three-quarters-decked expedition dinghy, launched in 2013. Will may now occupy one of the most enviable yards in the land, the No 1 Covered Slipway in Plymouth, but when I visited him to play at being a boatbuilder in February 2012, it was at his “old” shed – a rural, tin-roofed, inland building. I was there to help Will steam timbers for his boat, then in build. For some reason, Will seems keen to involve me in his oddball projects – probably because he knows I’ll go along with them. The dinghy is to be the chariot for Will’s self-appointed odyssey to sail around every lighthouse off the British coast. The plan is that one day this summer I will accompany him to the Farne Lighthouse off the Northumberland coast. 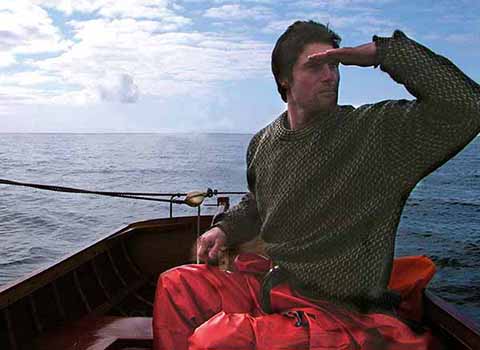 Will Stirling at the helm of “our” dinghy.

Techno and Rolling Stones numbers banged out of the stereo like an illegal high as we steamed the green oak timbers in, removing each scalding timber with bare hands then laying them across the boat and pushing them into shape.

For now, it was just good to be sailing the boat for the first time, feeling a little of the pleasure that a boatbuilder knows when he sails a boat crafted by his own hands. It was in comic contrast to our last time afloat a couple of years ago, in a sinking wreck; that too was back in February 2012… At 5am the morning after our boatbuilding stint, we were at Will’s house in Plymouth, and I discovered that he keeps weird and sinister things in his fridge, like dead polar bear paws and pre-mixed sandwich filler. We threw sandwiches together quickly (and carefully) and an hour later were trudging along the muddy banks of the Tamar, carrying two heavy iron spades and a faulty Seagull: plan A and plan B, respectively. By a clearing at the river’s edge lurked Will’s old harbour launch, a grey wreck tied to a tree. He waded out in an old-style rubber drysuit to free it, and paddled it over to the water’s edge. I took one step towards it and fell in up to the knees, the freezing brown water of the Tamar pouring in over the top of my sailing boots. Inside the boat was 6in (15cm) of water, and as I paddled, Will bailed, and a filthy grey rib-scape of wood, mud and drowned leaves slowly appeared. We had half a mile to paddle against a foul tide to the slip for hauling out. The boat must have weighed near a ton, and our only propulsion was two heavy spades – unless the Seagull started. And now, our scuffling around had disturbed a makeshift plug, and a coin-sized round hole in the hull was spouting water like a fountain. It was my first time in a properly sinking wooden boat and rather exciting. We plugged it with a twig and drifted backwards as Will repeatedly pulled on the Seagull. After 20 minutes, it burst into life and we were on our way.

Back on Drake’s Island in sunny June, we wandered among the 1860s-built casement built atop the low cliff. Here guns lie discarded, doors hang ever open, paint peels and room upon endless room, presumably once home to military personnel, is set into the inside of the stone fortress. In the almost-complete silence, we could hear, or feel, the Plymouth-Roscoff ferry, long before we saw it. We climbed to the top and ate our lunch on top of an enormous cannon, then returned to the boat slowly through a dark, underground tunnel, once used to transport munitions. The island has the strange feeling of unfinished business, its story cut off mid-paragraph, its future unwritten. These days, its most famous inhabitants are rare little egrets. The only other visitors were two urban explorers who arrived by kayak. It was lucky they had, as we needed their help pushing our dinghy back in to ride the flood back to the marina – the tide had left us high and dry. Sailing might be a comedy of minor mishaps, but I still think we will make it to the lighthouse – one day.

Why I sail dinghies – a personal essay by Roger Barnes

Will takes his dinghy across the Channel

Beside the wind, Alva Yachts Ocean Sail 82 will use an electric motor powered by solar ...