A race between two Bligh replicas

Bounty’s End was much closer to the line than Bligh’s Tribute as I counted down to the start over the VHF. On each boat the sails were hoisted and hanging limply, but the oars were out and soon they were sweeping through the water in unison.

Immediately a call came through on the radio. “I thought we agreed we would have a maximum of six rowers,” said Reuben Thompson, Bligh’s Tribute’s skipper. I responded that we hadn’t, but not without some discomfort. In this inaugural race of two replicas of William Bligh’s famous open boat, I then watched the eight-oared Bounty’s End pull away from the six-oared Bligh’s Tribute in what would be a somewhat one-sided contest. 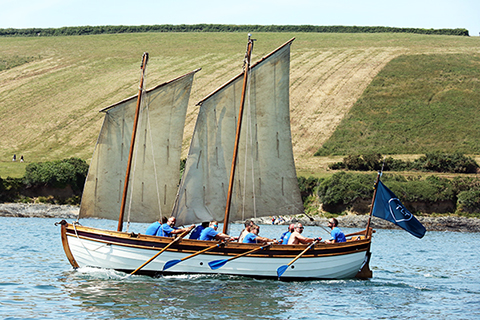 It was in 1787 that HMS Bounty left England under the command of William Bligh, bound for Tahiti from where it was planned to collect breadfruit plants and transport them to the West Indies. During the five months that the crew spent in Tahiti, indiscipline and Bligh’s seemingly harsh way of dealing with it caused friction between him and his men. Three weeks after they set sail again, Fletcher Christian led a mutiny as a result of which Bligh and eighteen men loyal to him were cast adrift in a 23-foot open boat. Their chances of survival were almost non-existent and yet, with the loss of just one man who was killed by natives on one of the islands where they stopped to seek food and water, Bligh managed to safely navigate more than 3,500 miles to a Dutch settlement on Timor.

It isn’t clear how many replicas of Bligh’s boat there have been – but three Hollywood films about the mutiny have been produced and at least that many re-enactments of Bligh’s small boat voyage have been undertaken – but two have been built in the past couple of years: Bounty’s End by Mark Edwards at Richard Bridge Boathouses for a re-enactment voyage to be filmed for the Channel 4 documentary Mutiny; and Bligh’s Tribute by a team of staff and volunteers at the National Maritime Museum Cornwall (NMMC) led by experienced pilot gig builder Andrew Nancarrow for the in-house Captain Bligh: Myth, Man and Mutiny exhibition.

Both boats were built from the same lines drawing which is in the public domain – at the National Maritime Museum Greenwich and also in Bligh’s journal – but one is clinker and the other is carvel: no one really knows which the original boat was and, after extensive research (including from some common sources), the builders of each boat drew different conclusions. The NMMC team believe it would have been carvel, not least because of the evidence in the book The Shipwright’s Vade Mecum, published in 1805. “There is a clear statement that ships’ boats up to cutter rig, about 30ft, were carvel and above that were clinker,” said the NMMC’s Mike Selwood. “And there is a logic to that as they would want the larger boats to be as light as possible for ease of handling.”

But according to Mark, folklore has it that when Bounty was taken over by the navy (she had previously been a collier) and was being prepared for her voyage to Tahiti, she already had a ship’s boat but Bligh didn’t like it. It was dropped (possibly deliberately) by a crane and severely damaged, and this allowed Bligh to commission an Isle of Wight boatbuilder to quickly produce a shallow draft lightweight clinker replacement which, he thought, would be more suitable for landing in Tahiti and loading up with cargos of breadfruit plants. For this and other considerations, Mark concluded that there was “90% good reason” to think the original boat was clinker, but he also argued in favour of clinker as he knew it would be easier and quicker for him to build (he wasn’t given much time to do so) and that clinker would better withstand its planned voyage as deck cargo through the heat of the tropics to the Pacific starting point of the re-enactment.

The only other significant difference between the boats was that Bounty’s End, in order to comply with MCA stability requirements for its ocean voyage, was given about 6” more beam and 8” more freeboard.

Bounty’s End was built with a utile keel, and oak and sweet chestnut sawn frames; while for Bligh’s Tribute, oak was used for all the frames and the centreline. In both cases the choice of planking material was influenced by real concerns that it would dry out considerably but for very different reasons: Mark used ½” thick plywood (but traditionally clenched) as he didn’t have enough time to obtain a suitable seasoned solid timber which would withstand that long tropical ship voyage; and the NMMC selected ¾” thick Siberian larch which had been air dried for about five years – “very expensive but super stable stuff with a very fine grain,” said Mike – to allow Bligh’s Tribute to be exhibited indoors for the best part of a year. Both boats have the same two-masted dipping lug rig which, after further extensive research, was initially drawn by Mark and then developed by lugger expert Chris Rees who also made the spars (hollow to help the boat’s stability and in joinery grade redwood) for Bounty’s End. The NMMC decided to copy the sail plan although Bligh’s Tribute’s solid Douglas fir masts were subsequently shortened while retaining the same sail area. The sails for both boats were made by Sailtech in Falmouth, both in Duradon polyester sail cloth with traditional looking construction although Bounty’s End’s have Dyneema bolt ropes, while Bligh’s Tribute’s are polyester and have several features – no pressed rings, for instance – faithful to the naval standards of the time.

Bounty’s End was completed in the spring of 2016 and, as it turned out, was then flown out to the Pacific to begin her voyage; while Bligh’s Tribute was finished in something of a rush just in time for the exhibition in March 2017. “The paint was nearly dry when it opened!” said Mike.

The Bounty’s End voyage was led by former SAS soldier Ant Middleton with three-times circumnavigator Conrad Humphreys variously described as his “second in command”, “sailing master” and “skipper”. Nine men started the voyage (and never was there any reference in the Channel 4 series to the fact that Bligh had twice that many in the same size boat) but two were taken off by the escorting mother ship – one, ironically, for insubordination, and the other with badly infected hands. When they were becalmed for several days towards the end of the voyage the remaining crew were forced to take fresh water from the mother ship but, other than that, the voyage was unsupported, and they safely reached Timor after 4,000 miles and 60 days.

Around 125,000 people visited the Bligh exhibition before it closed in February 2018, by which time Conrad had acquired Bounty’s End with a view to providing life-enhancing sailing opportunities for young people with special needs. The idea of organising a race between the two boats was gathering interest but there could hardly have been a greater contrast between the seagoing experiences of the two boats. Bligh’s Tribute still hadn’t touched the water and, before she could do so, more work was needed: for instance, the steel deck fittings had to be taken off to be galvanised (there hadn’t been time to do this before the exhibition opened) and her display rig had to be altered to one that would actually function. She was eventually launched on 24 May, exactly a month before the race – for which I had (been!) volunteered as “race officer” – which would take place immediately after the Small Boat’s Parade which marks the end of Falmouth Classics regatta.

I am not alone in having a vague recollection of discussing the number of oars that should be allowed, but nothing was ever agreed. We had originally anticipated that it would be predominately a sailing race but on the day the wind was very light and so rowing (even with only six oars) would prove to be much faster than sailing. But both skippers had anticipated that it would be essential to have experienced rowers and so members of Salcombe Gig Club had been recruited for Bounty’s End and Devoran Gig Club for Bligh’s Tribute.

The race started and would finish off Falmouth’s Custom House Quay and included two triangles around the inner part of Falmouth Harbour. On the first round, each boat had to go ashore at a beach near Flushing to collect a bottle of beer from its sponsor – St Austell Brewery for Bligh’s Tribute and Sharp’s (no relation!) for Bounty’s End. Bounty’s End’s extra freeboard clearly provided a couple of extra difficulties: for the rowers who needed to raise their oar handles higher in order to properly immerse the blades, and at the beach stop where things looked a little uncomfortable for the beer collector as he scrambled back aboard. However, her eight rowers managed to get away from the beach about a minute and a half before Bligh’s Tribute and from then on gradually stretched their lead until, after just under an hour of racing, they finished more than seven minutes ahead.

The exhausted rowers then put their oars away and the two boats enjoyed a gentle sail together – not for long but perhaps long enough to suggest that, at least in those conditions, Bligh’s Tribute is a faster sailing boat. Back ashore, everyone agreed that there should be a rematch next year on Conrad’s home waters in Plymouth and with slightly tighter rules. Conrad himself, as he was presented with the trophy, a half model of a Bligh ship’s boat made by an NMMC volunteer – carvel, ironically – suggested that there should be another, previously undiscussed rule. “Both boats must have done a 4,000-mile qualifying voyage,” he said.