Aqua Expeditions: News from the remote ends of the world - News - NAUTICA REPORT

News / Aqua Expeditions: News from the remote ends of the world Aqua Expeditions: News from the remote ends of the world

To discover nature like Charles Darwin requires an explorer vessel and an empty map. Francesco Galli Zugaro has both. As the Italian recalls: “When I set up my Amazon adventure, the only visitors to the Pacaya Samiria National Reserve were backpackers on banana boats.”  This upper reach of the Peruvian Amazon is a seasonally flooded forest that hides jaguars, river dolphins and red-faced spider monkeys. “I rented a speedboat, chef, photographer and guide, then sailed off,” says Galli Zugaro. “Ten days later a dream became a plan.” 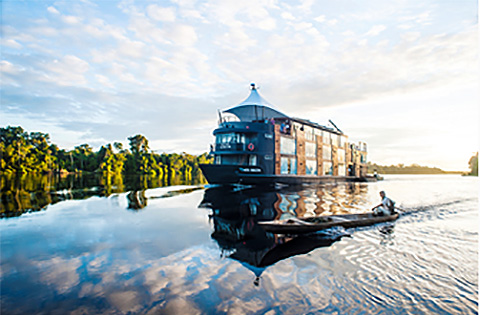 In 2010 that dream became Aria Amazon. She is a 45m river explorer vessel custom-built to cruise the Amazon while emitting minimal noise or wake. The six star luxury extends to naturalist guides, rooftop viewing platforms and low emission explorer skiffs. The latter are used to see coatis, king vultures and scarlet macaws, plus South America’s elusive large cats. Other once-in-a-lifetime experiences include kayaking to a secret freshwater ‘swimming pool’ and mountain biking through an Amazon river town. 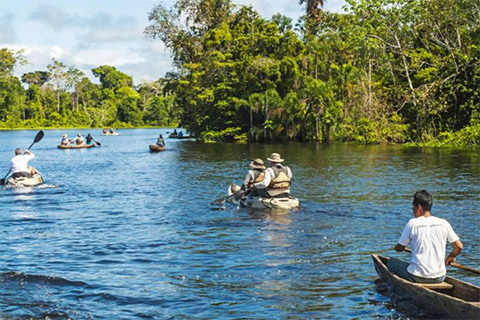 “Our clients are clued-up customers in search of authentic experiences like these,” explains Galli Zugaro. “They are used to staying in Aman Resorts or Four Seasons and can see through a fake smile or a contrived encounter.” However, on return from a day of exploration, Galli Zugaro’s guests “don’t want to sacrifice creature comforts like air conditioning or high pressure showers”.

For price transparency, Galli Zugaro chose to counter the traditional charter market by making each Aria Amazon cruise fully all-inclusive. Booking flexibility allowed for 3, 4 or 7-day charters. Guest to crew ratios of one to one were also deemed a must. 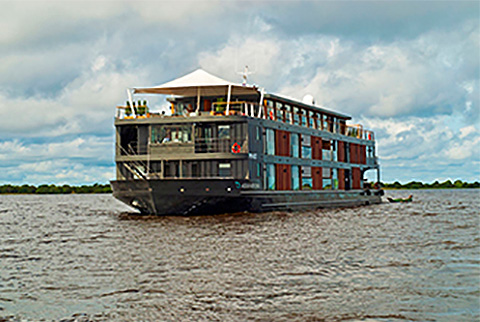 The uncharted Amazon proved a success. But where else could match luxury with chance-of-a-lifetime sights? “I explored every opportunity,” recalls Galli Zugaro. “I travelled upriver on the Yangtze.” He also spent three weeks amid the wildlife on Lake Kariba in Zimbabwe. “Here I evaluated the possibility of a luxury houseboat that could travel to Bumi Hills,” where a dusty airstrip provides propeller plane access to Victoria Falls. None were exploratory or exotic enough for a high capacity expedition yacht.

Galli Zugaro’s search led him to the Mekong in Cambodia and Vietnam. This 4,000km-long river boasts a biodiversity only bettered by the Amazon. In 2014 the Italian launched Aqua Mekong. At 62m she comprises 20 suites styled by Noor, the design agency behind Raffles Le Royal in Phnom Penh, one his explorer vessel’s ports of call. 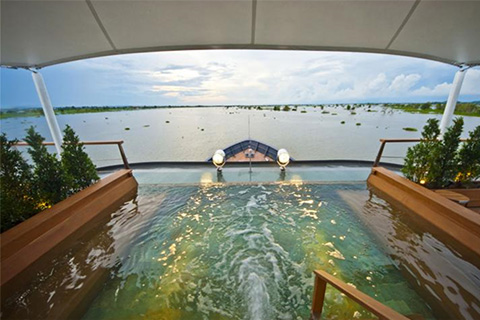 Each suite boasts the floor-to-ceiling windows popular on Galli Zugaro’s first vessel. Plus an infinity pool. While Michelin-starred chef David Thompson presides over a menu of Indochine-Moderne. Other highlights of this six-star charter from Ho Chi Minh City include sunset temple visits and naturalist guides who can spotlight 20,000 floral species.

Galli Zugaro's next quest proved harder still. He wanted an expedition yacht capable of showcasing Indonesia’s culture and colour. “To commission a luxury explorer vessel with a 40 guest capacity you're looking at between 25 and 50 million dollars,” he explains. “So I put my feelers out to brokers like Camper & Nicholsons and said 'if any robust hull comes across your desk, let me know'.” 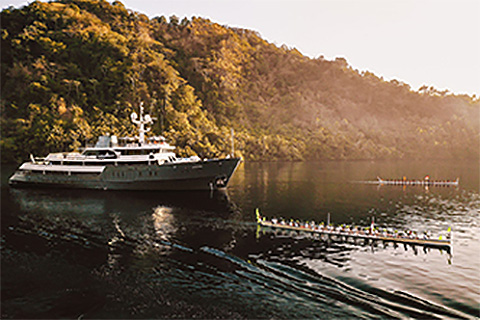 A chance viewing of the former HMS Beagle occurred in Genoa. “In 1968 she was commissioned into Britain’s Royal Navy as a scientific research ship,” says Galli Zugaro. “Of course the original Beagle carried Charles Darwin to the Galapagos Islands, which struck a chord as my yachting career also started there.” To find a yacht like her was “one in a million,” claims the Italian. Especially among Indonesia’s 18,000 islands, where “no steel explorer yachts with stabilisers and 15 luxuriously large cabins exist”.  The refitted yacht relaunched in 2019 as Aqua Blu. She has an exclusive remit to explore the Spice Islands, Raja Ampat and the Komodo National Park on 7- and 12-day itineraries. The recent launch has three fast tenders to reach cetacean hotspots, as well as islands inhabited solely by sunbirds and macaques. Diving equipment and paddleboards allow guests to drift alongside whale sharks and hawksbill turtles. Motorised toys are scorned in a destination that holds the marine biodiversity record: 284 species during a single scuba dive. “Like Aria Amazon and Aqua Mekong, we also designed Aqua Blu to fit the vernacular of a unique destination,” says Galli Zugaro. Indonesian sketches drawn by Alfred Russel Wallace, a naturalist and contemporary of Darwin, were custom-printed onto the yacht’s ceramics. From an auction house in New York, 16th-century Dutch lithographs featuring birds-of-paradise were purchased to decorate the social spaces.  “Experiential travel means getting involved,” continues Galli Zugaro. That’s why he has partnered with the Raja Ampat Manta Project. The programme allows guests aboard Aqua Blu to log oceanic manta rays, which can attain wingspans of 7m, using their smartphones. The resulting database has already been used to achieve a nationwide no-catch, after case studies showed government officials that the average giant manta yields €1.9m in ecotourism receipts.  Exploration in remote areas has one distinct bonus. It’s that guests are likely to be the only individuals seeing that clouded leopard or Amazonian jaguar - or sampling that Michelin-standard locally-sourced cuisine.  “Anyone can book a Mediterrenean charter,” concludes Galli Zugaro. Bragging rights on his yachts include ‘I went on an eco cruise up the Amazon’ and ‘I’m helping a scientific study aboard the former HMS Beagle’. If Darwin were alive today, he’d be first in line.