News / America's Cup - It's getting real on the Waitemata Harbour It’s getting real on the Waitemata Harbour and even though it’s the middle of Auckland’s winter, we have had a small glimpse of what the ‘Summer of Sailing’ will look like.

When American Magic became the first Challenger to sail on New Zealand waters on the 28th of July, the sailing world set their sights on the City of Sails just in time to see Emirates Team New Zealand's test boat Te Kahu within stones throw of the American AC75.

But it was today that the playground started to get crowded.

With just over 4 months until the first official racing of the 36th America’s Cup during the ACWS Auckland / Christmas race starts, the two AC75's, DEFIANT and Te Aihe, sailed in the same patch of water at the same time while training separately on Auckland's Hauraki Gulf. 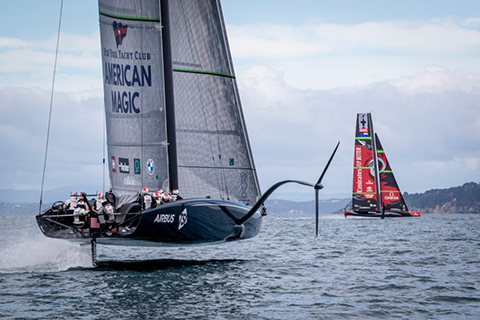 Soon after spectators, recon teams, media, and online forums were studying all available photos and video of the two foiling monohulls trying to answer the usual long list of questions.

However no matter how good the recon is, or what long lens you own, these questions will remain largely unanswered until December, because the rules are clear, under the Protocol governing the 36th America's Cup, sailing or testing "in a coordinated manner" against another AC75 is prohibited for all teams.

With New Zealand’s winter offering perfect weather conditions, the two teams had consistent sailing conditions throughout the day. American's Magic skipper and Executive Director Terry Hutchinson said "Having both boats out there today was certainly a nice moment. We have a lot of respect for the Defender, and we know we have a huge task in front of us over the next eight months. The key for us is just to stay focused on our process, and maximize the time we have left before the Prada Cup.” 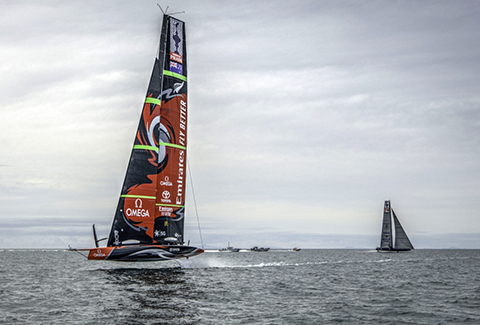 Emirates Team New Zealand agreed with the setniment with Peter Burling adding "It was the first time there were two AC75's on the Waitematā Harbour, It definitively steps up the intensity here."

On the opposite side of the world the other two challengers, INEOS TEAM UK and  Luna Rossa Prada Pirelli Team, are trying to make the most of the European summer, squeezing training sessions in around logistic plans to relocate to Auckland in the coming months.

A critical time for the America’s Cup teams, and while the sailing world is still trying to cope with the technology revolution brought by the AC75, behind closed doors the second generation of these boats is almost ready and everything we thought we knew could change once again.