- Clean environment, no vibrations or fumes

- Sea trials are planned during the Cannes show conditions permitting

SILENT-YACHTSconfirmed that the new SILENT 60 solar electric catamaran that has recently been launched is going to make its first public appearance at the upcoming Cannes Yachting Festival 2021. The shipyard plans to organise media sea trials during the show as well if they’re allowed. The catamaran will be located in Quai Max Laubeuf.

This is the first unit of the model while eight more hulls are currently under construction and 17 are ordered in total. What makes it even greener is that it was built with a kite wing, a special system that in contrast to conventional sailing yachts, does not require a big mast and the kite sail generates much more power per square meter than a conventional sail. SILENT-YACHTS offers the optional available kite-sail system for all their models. 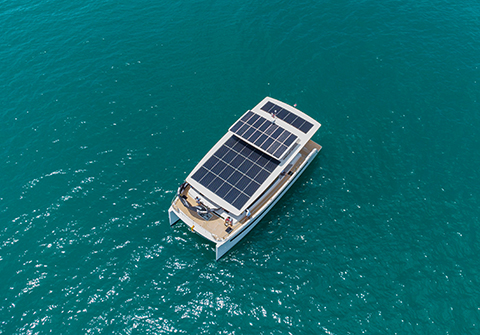 The SILENT 60 carries a light compact kite wing from Wingit, that does not require a big mast to hoist the kite and it's also easy to use. A kite wing that operates in such heights, generates up to 10 times more power per square meter than a conventional sail. So, how does the kite wing system work? There is a dedicated box in the bow area of the SILENT 60, which contains the kite (the sail is 13 sq. m) including all its components (winches, mast, ropes, etc). Here the entire system is also stored, when not in use.

To launch the kite, it’s only required to set up a small mast, which is only two feet high, with four stays (6 mm Kevlar “ropes”) that need to be fixed to four foldable pad-eyes (this takes a few seconds). After taking out the kite, it gets pumped up with an electric pump that is in the box as well (this takes only a few seconds), you switch on the winch,throw the kite overboard where it will drift away with the wind and then the kite can start from the water by pulling the ropes. When in the air, the automatic steering can take over - the pulling rope is released until the kite is more than 120 meters above the boat and it starts to paint a huge “8” in the sky.

Bringing it down is the reverse process. The automatic control moves the kite to a position right above the boat where it has the least pull on the rope, then the owner or a crew member winches the kite down electrically, pulls the right rope so that the kite collapses above the front deck. Now, the kite gets put back into the bag and stored in the box.

Advantages of the kite wing

There are three major advantages of the kite wing for the yacht. First, extra propulsion. The kite can pull the 30-ton SILENT 60 with about 4-5 knots and it reduces the consumption of the e-motors, thus extending the range. The already green solar electric catamaran gets greener and more eco-conscious this way. Second, emergency. If a floating fishing line gets entangled in the propellers, a kite can serve as a reserve propulsion that enables the boat to get to a protected place where the rope can be cut and the prop set free. Last but not least, fun and joy. It is great to see the kite high up in the air, pulling the boat with the power of the wind.

The SILENT 60 also has a new high-performance hull form that is optimized with CFD study, with longer waterline and reverse bow. Its exterior design’s signature details are long window stripes at the sidewall of the hull and more window surface overall.

The boat can be handled by two people with ease and offers plenty of space for families and crew. For adventurers, additional water toys, SUP´s, kayaks and e-bikes can be stored in the bridge deck.

The SILENT 60 offers a flexible layout. The first has four guest cabins on the lower deck, including a spacious master suite. There are many social areas on board, an airy main saloon, an aft cockpit, a cosy bow seating and a flybridge. The yacht has higher headroom everywhere (up to 230 cm in the saloon) and more powerful solar panels (42 pieces for 17 kWp against 30 for 10.8 kWp on the SILENT 55).

The new model has a draft of less than 1 meter, which allows it to reach shallow bays that may be crucial for areas like the Caribbean and South East Asia. The SILENT 60 has two swimming platforms in the aft which can optionally be extended by 90 cm upon owner’s request. In this case, the boat may carry a pair of electric jet skis. A liftable hydraulic platform, which is located between the two swimming platforms, can also be enlarged from the standard 3.7 x 1.7 m to 4 x 2.4 m to carry a larger tender – up to 350 kg and 4-meter long. 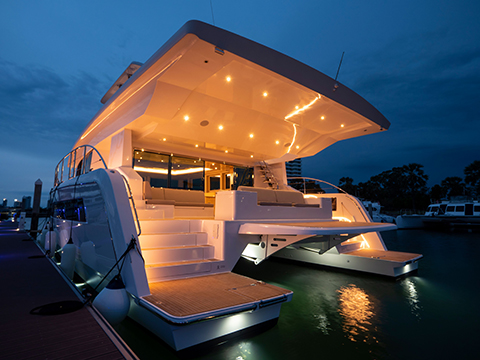 The SILENT 60 is equipped with the company’s aeration system, which provides cool and fresh air to all accommodations, heads, and in the saloon. The airflow in each space is individually adjustable and can be used when the weather conditions require the windows to be closed. In addition, a reverse-cycle heat-pump system heats the interior when necessary, ensuring all-season comfort. The insulated hull ensures efficient achievement of desired on-board temperatures.

The new catamaran - thanks to its advanced conveniences - offers a comfort level that sparks peace of mind. A water-maker powered by the solar-electric system produces enough water to supply a full six-stateroom company with a reasonable rate of consumption. All on board appliances operate on the 220/110-volt system. The galley has refrigerator and freezer space to sustain the crew and an efficient induction cooktop, precluding the need for carrying propane.

The SILENT 60 is designed to go everywhere as a true ocean-going cruising yacht. It can cruise efficiently for up to 100 miles a day for weeks. At the same time, the arrangement of the components enables the system to power all on board systems without the need of fuel to power a generator. The yacht’s cruising speed is 6-8 knots but it may be fast when needed reaching 20 knots maximum speed. 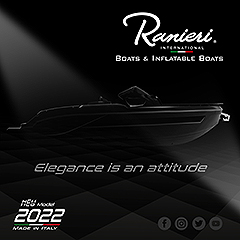 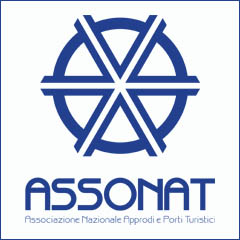